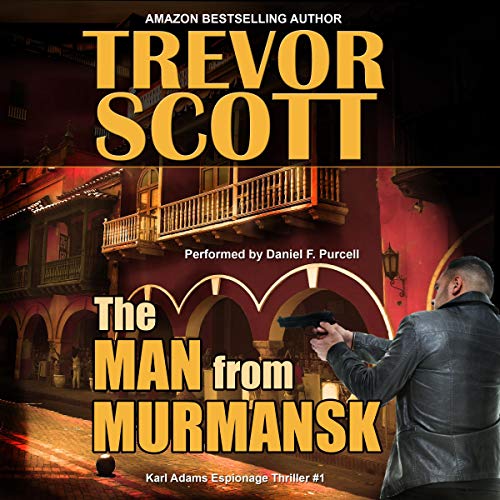 The Man from Murmansk

By: Trevor Scott
Narrated by: Daniel F. Purcell
Try for £0.00

Karl Adams is a new CIA officer undercover and immersed in Murmansk, Russia, as a Spanish graduate student at the local university. On a cold February night, while flying a drone, he takes video of a missile on a transporter erector launcher being loaded aboard a merchant ship. This could be a violation of the 1987 Intermediate-range Nuclear Forces (INF) Treaty signed by Reagan and Gorbachev.

Karl is recalled to America, but not for long. The Agency wants him to continue with his mission, which brings him to a tumultuous South American country. As the US Navy tracks the Russian ship across the Atlantic, it soon becomes clear that a new Cold War could turn hot, bringing the two superpowers to the brink of war. With Karl being the son of legendary CIA officers Jake Adams and Toni Contardo, he definitely has the DNA to complete this mission. But in the cat and mouse spy game, nobody is safe.

What listeners say about The Man from Murmansk

I was given a link to download this audiobook and I’m giving my honest review freely. This was a really pleasant surprise and a bit of a gem! The whole story is a bit of escapism with really good characters and story. I’d definitely recommend.

couldn't get past the narrator!

I to see tried but narrator was terrible.
It made the main character seem like a dunce, not a CIA agent
too bad, so sad, as I think the story might be good

Karl was a new CIA agent, son of a legendary father of the CIA.
Going undercover with Russia was like a cat and mouse game. Good intriguing plot. The narration was okay, given audio for my voluntary review