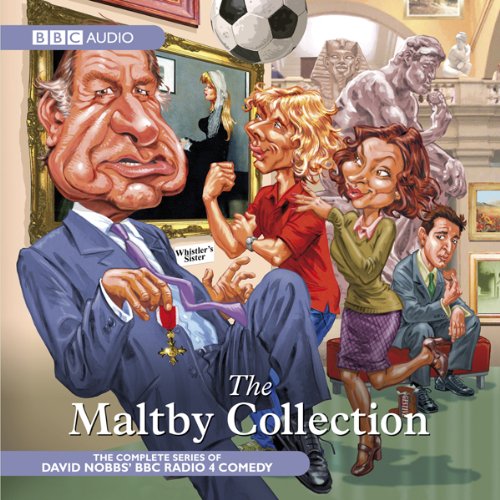 By: David Nobbs
Narrated by: Geoffrey Palmer
Try for £0.00

From the creator of Reginald Perrin, this is the complete series of David Nobbs' BBC Radio 4 sitcom based in a London art Gallery.

Rod Millet has always dreamed of working at the Maltby Collection. He used to visit as a teenager, when he lusted after Whistler's Sister, and his Mother, Rod wasn't picky back then. On becoming the Museum's Deputy Curator of Painting and Sculpture, however, it quickly becomes apparent that the chavvy son of a self-made biscuit mogul isn't going to fit neatly into the musty, insular world of London antiquities.

In these six episodes, Rod tries to save the gallery from closure even though by doing so he is threatening director Walter's early retirement and endeavours to find romance with the lovely Prunella.

Can Millet save the day and win his boss's hand? Listen and find out... Starring Julian Rhind-Tutt (Green Wing) as Rod and Geoffrey Palmer as Walter,this well-written, gentle comedy features guest appearances from Hugh Dennis and Barry Cryer.

What listeners say about The Maltby Collection

through the archaic lives of museum curatorship and the new boy from the buscuit empire, who causes a stir within the ranks. Some good twists and turns and the exquisite dry humour of Geoffrey Palmer and the interaction of other cast members make this a really enjoyable story to listen to.

This was simple and very enjoyable comedy. I didn't laugh out loud but was entertained and kept interested for the duration.

It was at times quite a different role to what I am use to seeing with Geoffrey Palmer. The character had periods of animation. It was a good mix of new and well known actors which I enjoyed.

Definitely not a favorite

Would you try another book from David Nobbs and/or Geoffrey Palmer?

I would try another with Geoffrey Palmer.

Would you be willing to try another one of Geoffrey Palmer’s performances?