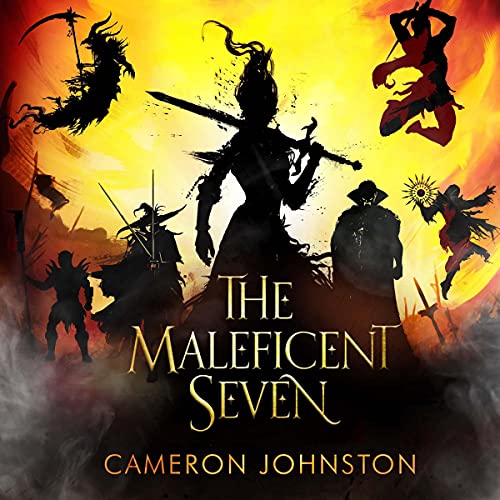 By: Cameron Johnston
Narrated by: George Weightman
Try for £0.00

When you are all out of heroes, all that's left are the villains.

Black Herran was a dread demonologist, and the most ruthless general in all Essoran. She assembled the six most fearsome warriors to captain her armies: a necromancer, a vampire lord, a demigod, an orcish warleader, a pirate queen, and a twisted alchemist. Together, they brought the whole continent to its knees.... Until the day she abandoned her army, on the eve of total victory.

Forty years later, she must bring her former captains back together for one final stand, in the small town of Tarnbrooke - the last bastion against a fanatical new enemy tearing through the land, intent on finishing the job Black Herran started years before.

What listeners say about The Maleficent Seven

I’m no longer a big fan of fantasy, but I took a punt on this and was not disappointed. Some good characters and gritty writing made it most enjoyable. Some of the plot twists were unexpected but a few were predictable, as were some of the characters. Overall an enjoyable read, made more so by being a standalone story, so no waiting around for more parts.

40 years after The Black Harren abandons her army on the eve of battle, a new evil arises that only the six villainous captains she spurned have a hope of defeating.

This is Suicide Squad meets Joe Ambercrombie. The first 25% is recruitment of the six and the last 75% is war. It’s very plot driven so if you’re looking for a deep character dive you won’t find that here but if you like grim dark/war fantasy I think you’ll absolutely love this. It’s fast paced, exciting, unique, darkly humorous and has all the morally grey/villainous characters you could ask for. Side note: The narrator is fabulous, every voice is very distinct, if you like audiobooks.

amazing! Really hope it helps you buy this book

this was a great book. pace was good, and the story keeps your mind filled with great images. I am a anime lover so I got a great trill after getting in to the book and finding it to be a great take on 7 deadly sins but dark and creative. I love the fact that age and time has a factor in this book as well. narrator was perfect and fit the story like a glove. nothing worse than a great book turned bad because of actor chosen to read. this thank the gods is not one of them, he did amazing.

This has easily become one of my favorite books. The characters, though all messed up in one way or another, somehow left me rooting for them till the end. It’s a masterful twist on an amazing story, making you care about and cheer for the most vile and wicked the world has to offer. A true masterpiece.

I hadn’t heard anything about this story, the author or narrator, this was one of those “looking for a new short story, and the witty name made me do a double take and I decided to use a credit and take a chance. I gotta say, I really rather enjoyed this short sorta twisted retelling of a classic tale.
The characters were amazingly easy to relate to and were easy to love. I am surprised that in such a short, single volume tale, that each backstory and character trajectory and traits were so rich and it was so easy to get lost in the story and have favorites. Just enjoy the story for what it is. Don’t compare it to anything or try to put more into it than what is there. To me, Books like this are meant to be quick resets to restore the magical traits of storytelling and not meant to be any form of long drawn out epics. I was very pleasantly surprised with this story and I’m glad I stumbled on it by accident.

As a prolific consumer of fantasy novels, I find it harder and harder to be “wowed” with a book. This one did it. Great story, intriguing characters, great narration.

A truly good work. I was left satisfied. The narrator does an amazing job in portraying this story.