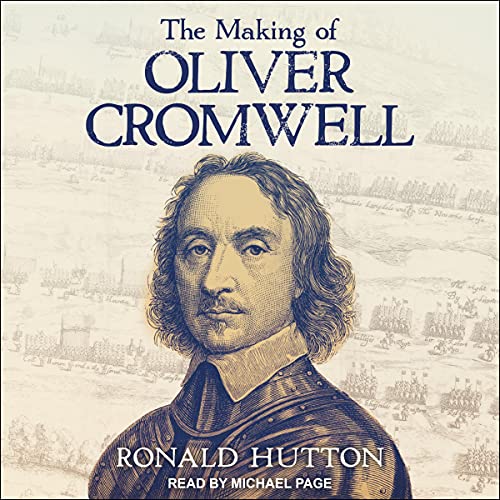 The Making of Oliver Cromwell

By: Ronald Hutton
Narrated by: Michael Page
Try for £0.00

The first volume in a pioneering account of Oliver Cromwell - providing a major new interpretation of one of the greatest figures in history.

Oliver Cromwell (1599-1658) - the only English commoner to become the overall head of state - is one of the great figures of history, but his character was very complex. He was at once courageous and devout, devious and self-serving; as a parliamentarian, he was devoted to his cause; as a soldier, he was ruthless. Cromwell's speeches and writings surpass in quantity those of any other ruler of England before Victoria, and, for those seeking to understand him, he has usually been taken at his word.

In this remarkable new work, Ronald Hutton untangles the facts from the fiction. Cromwell, pursuing his devotion to God and cementing his Puritan support base, quickly transformed from obscure provincial to military victor. At the end of the first English Civil War, he was poised to take power. Hutton reveals a man who was both genuine in his faith and deliberate in his dishonesty - and uncovers the inner workings of the man who has puzzled biographers for centuries.

What listeners say about The Making of Oliver Cromwell

With God in his side

In this first volume, Ronald Hutton has succeeded in writing a fresh new biography of Oliver Cromwell from his birth in 1599 up to the end of the first Civil War in 1646.

The most distinctive part of this scrupulously detailed yet accessible study is the succession of brief descriptions of the England in which the many battles and skirmishes were fought. These are not just the thumbnail sketches of their settings and distinctive features of towns and rivers, but more importantly the details of the passing seasons to be seen in the landscapes, birds, creatures and even the skies and stars. The cavalry races through hawthorn and cow parsley; the trees, turf and fields change colour and texture; swifts scream; the first bluebells and primroses carpet the woods. These descriptions form a visual backdrop contrasting with the savagery of the action, revealing the passing of time, and accentuating the Englishness of this hideous civil war. I loved them.

Also vivid are the frequent and moving details of the soldiers’ sufferings. Never mind dreadful injuries and deaths, there was terrible hunger and thirst as rations and money ran out with men eating roots and drinking from dark puddles, and there was the stench of blood, piss and sweat on the battlefields. No surprise that many turned tail and deserted. And then there were the slaughtered horses taken away from homesteads where failed or battle-ruined crops left families without food...

Creating a real England in which Cromwell’s astonishing career took place is a strength of this crisp biography. We see him in all his contradictions, strengths and in his iron uncompromising Puritan principles, guided by the God who in his view had saved him from death (as when his horse was killed from under him at Winceby) and blessed him with victory at Naseby. His intense religious zeal is a difficult concept for us today and a domestic comment in a letter to his newly married daughter Bridget illustrates just how imbued Cromwell’s mind was with his version of Protestantism. He wrote of his hope that marriage had inflamed Bridget’s love of Christ. Was it this particular devotion to his God which made him capable of gratuitous savagery (particularly in his treatment of defeated men)? He was certainly adept at outright lying and extreme self-seeking aggrandisement. Hutton shies away from none of these unappealing traits.

The battle scenes are presented with absolute clarity explaining succinctly the strategies and the actions in detail, enough to satisfy specialists in Civil War warfare as well as enabling non-specialists like me to understand – an achievement of the author!

Michael Page’s narration is appropriate and authoritative. The only misjudgement I would pick up is in the reading of dates which is presumably a matter of production. Currently dates in academic books are written as 23 January / 1 June etc but read out as “On twenty three January…” or “on one June…” rather than “on the twenty third of January” or “on the first of June..” is a serious annoyance to the listener – particularly as there of course hundreds of such dates throughout.

Perhaps someone could consider this for Volume Two? I'm looking forward to it!