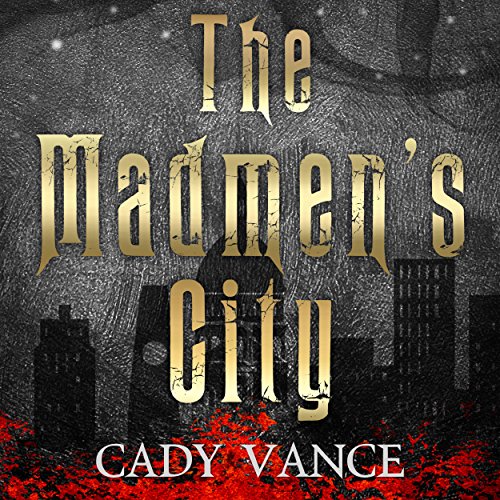 Seventeen-year-old Gwen Kane wants one thing in life: to follow in her dad's footsteps and become the best vigilante Towton City has ever seen. She just never imagined she'd have to prove herself by saving her dad's life. As he sits on death row for a murder he didn't commit, Gwen's desperate to do whatever it takes to find the true culprit and clear his name. She just has two problems.

One, she can't do it alone, and her only option for help is her rival, Silas Snow. But with his crazy good looks and brutal tactics, he's just as dangerous as the thugs themselves.

Two, the execution date is mere days away. If she doesn't get to the bottom of this - and quick - her dad will die.

What listeners say about The Madmen's City

This was an enjoyable and engaging YA superhero novel. It was not a 5 star read, but I was happy with the story. This was a superhero story with a similar feel to DC's Arrow or Batman. The heroes had no superpowers and the story was quite dark at times and we had plenty of ambiguity and moral dilemmas.

Towton City is ruled from the shadows by two rival crime gangs. The police and city officials are helpless to do anything to change this due to a combination of corruption and intimidation. The one shining light is the masked vigilante Phantom. He has fought the gangs for years and helped imprison a number of evildoers and is known by all as a man of honour. However Towton City has a second vigilante on the go, the newcomer Ethos, and he could not be more different to Phantom. Where Phantom captures the criminals and delivers them to the police for justice Ethos simply kills them! A major gang war is in the offing and when Phantom is framed for the murder of a underworld lieutenant he finds himself in prison and on death row. It is up to his young protégé, and daughter, Gwen to stop the gang war from exploding into a bloodbath and prove her fathers innocence before he is executed. Can she manage the task alone or dare she accept the help of the mysterious Ethos? And what of Ethos? He has a few secrets of his own. He is Silas Snow, the son of the notorious Snow gangs leader, and worse yet, he was the one who really killed the man Phantom was framed for murdering!

The story was quite engaging. Gwen was a likeable character who was easy to root for and it was interesting to see her morals and beliefs challenged as her methods clashed with those of Ethos and were put to the test as dark circumstances pushed her to the limit. Silas was also an interesting character and surprisingly likeable despite his willingness to kill and somewhat questionable morals!

All in all I quite enjoyed the tale and would be willing to listen to a sequel if one one ever appears.

It would probably have been best if a female narrator had been used for Gwen's POV chapters, but I guess Ryan Kennard Burke did an OK job.