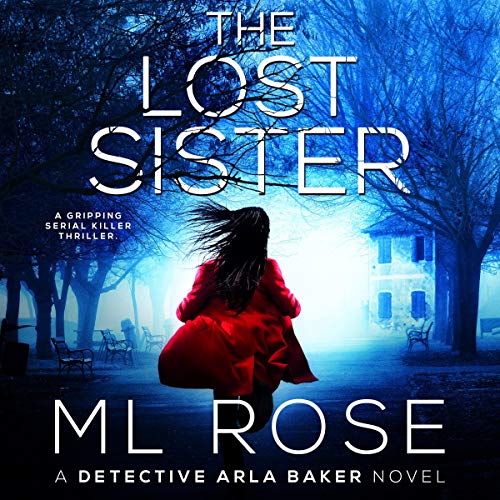 Today, a woman lies with her throat slit open in Clapham Common Park. There are three black triangles drawn on her body. DCI Arla Baker is called in to investigate.

Soon there is another body, killed in identical fashion, in the same location.

Arla knows a vicious serial killer is stalking the streets. But what does the killer know about Nicole? For Clapham Common is where Nicole disappeared 15 years ago. Arla refuses to accept Nicole is dead. She will not rest till she finds her sister.

As another body appears, it’s clear that the killer is hungry for more blood.

And Arla is not the one hunting this crazed psychopath.

Arla is the hunted.

As deep secrets of the past begin to unravel, so does Arla’s grip on reality. It’s not just her career on the line.

What listeners say about The Lost Sister

This brilliantly crafted mystery is Hitchcockian in its tension and intensity. Controlled in development, effortless in language, minute in detail and acute in its character study, this is a deeply satisfying fictional world. In Arla Baker the author gives us both the modern police-sleuth and the tortured, noble epic hero of Greek tragedy. A page turner!

Listened on audible so unaware of all the spelling mistakes. Narrators voice extremely annoying and though. Hated Arla who does what she does stupid risks bad attitude almost wished her harm. No way she could have remained on the force and Ben promoted with her antics. The usual so called female cop stereotype alcohol problems, no relationship, nothing in her fridge, disobeys orders, takes stupid risks with her life. All a bit yawn and found all the jumping about and long gaps with each character appearing hard to remember who was who...

Kind of boring. Wish it wasn’t in my iPhone So I just won’t listen Won’t recommend

Not Your Regular Murder Mystery

Based on the descriptions in Kindle, Audiible, and one book review, I thought this would be good mystery suspense novel. It turned out to be a psychological portrait of a violent serial murderer and a young traumatized police detective. It might actually be traumatizing to a reader not aware of the nature of the story.
A well done presentation of thoughts of pedophile serial killer, the storyline follows a police detective assigned to a series of vicious murders. The action is frequently interrupted with her flashbacks to early childhood when her beloved sister disappeared; and into the stream of thought of the murderer.
I found it difficult to follow the plot or endure the story but imagine it would be appreciated by fans of this sub-genre of mystery or maybe true crime.

Not Terrible, but Sloppy Discrepancies

Sometimes when popular authors are pushed to get a book out a year, I’ve noticed that the editors don’t play a hand or overlook discrepancies. But this is the first book in the series. Where are the editors? At first, I thought a glaring discrepancy wouldn’t play a major role in the novel, but in the end it played a significant role. I get really tired of authors and editors who do not check their work. This sto
ry was only slightly above mediocre and, because of Jan Cramer’s great reading, I’ll listen to the next novel and give this author another shot. However, if I continue to notice major discrepancies, I’ll give up. These publishing companies and authors make too much money to not take their work seriously enough to ensure their novels are correct, consistent, and cohesive throughout. If they’re not going to take their work seriously, why should I as a reader who pays good money to read their books?

I downloaded because of the narrator. This was not a good mystery. It just drummed on.