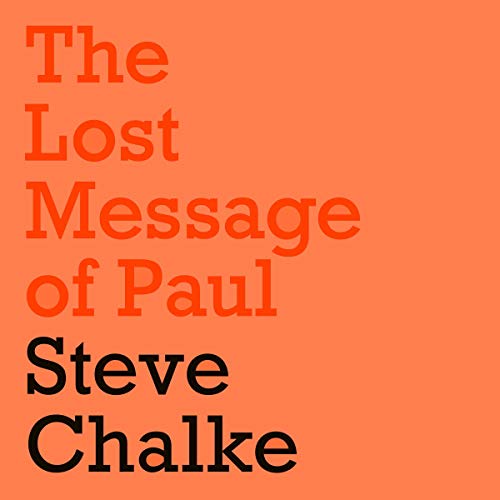 The Lost Message of Paul

We have misunderstood Paul, badly.

We have read his words through our own set of assumptions. We need to begin with Paul’s world view, to see things the way he saw them.

‘Over the centuries,’ writes Steve Chalke, ‘the church has repeatedly failed to communicate, or even understand, the core of Paul’s message. Although Paul has often been presented as the champion of exclusion, he was the very opposite. He was the great includer.’

About the author: Steve Chalke MBE is a British Baptist minister, the founder of the Oasis Charitable Trust - now one of the UK's largest charities - a former United Nations' Special Adviser on Human Trafficking and a sometimes outspoken Christian leader, popular public speaker and social activist. Steve is also the author of a large number of books and articles as well as a former presenter of, and now regular contributor and commentator on, television and radio.

"The Lost Message of Paul is not only well-written and fascinating; it is also profoundly bold and revolutionary. Highly recommended!" (Brian D. McLaren, author of The Great Spiritual Migration)

"Steve Chalke in his inimitable style opens up dense theological debate in an accessible and readable manner...fascinating." (Dr Pauline Muir, lecturer at Goldsmiths University and member of Oasis Church Waterloo)

"This is an exciting and timely book. Accessible and authoritative. A great lay introduction to historical criticism, contextual analysis and the writing of St Paul." (Dr Robert Beckford, Professor of Theology and Culture in the African Diaspora, Theology and Religious Studies, Canterbury Christ Church University, Canterbury)

What listeners say about The Lost Message of Paul

Every christian should read this book, reflect honestly on what Steve is saying and prayerfully consider adjusting their theology. My experience of 35 years working with homeless people has shown me God is far kinder and more loving than our limited minds can imagine.

really enjoyed listening to Steve but was disappointed with the last chapter. I thought he was going to really bring it together as he posed some very challenging questions to the mainstream Evangelical Church of which I am part of as a vicar. it left me feeling feeling flat because whilst posing some very challenging questions about what it means to be a true Christian Steve never seem to give a real alternative he left me feeling slightly more confused. I will have to re listen to The Book.

If you're a Christian or interested in the faith, this is a vital book. It's accessible but scholarly and filled with wisdom. Steve's main thesis is that Paul had been consistently misunderstood and misrepresented. Paul's real message was radical, subversive and liberating. If you think you'll disagree with Steve, ask the more reason to read it - it will make you think. I'll listen to it again, I know

Important insights to move us forward

A positive message as we begin to restore Paul to a place of kindness. This will frustrate some, enlighten others and transform a few. Thanks Steve for your work and courage.

Worth reading or listening to.