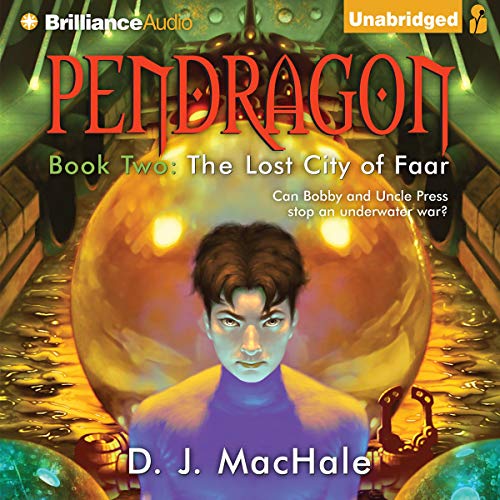 The Lost City of Faar

Fourteen-year-old Bobby Pendragon is not like other boys his age. His uncle Press is a Traveler, and, as Bobby has learned, that means Uncle Press is responsible, through his journeys, for solving interdimensional conflict wherever he encounters it. His mission is nothing less than to save the universe from ultimate evil. And he's taking Bobby along for the ride.

Fresh from his first adventure on Denduron, Bobby finds himself in the territory of Cloral, a vast world that is entirely covered by water. Cloral is nearing a disaster of huge proportions. Reading the journals Bobby sends home, his friends learn that the desperate citizens of the endangered floating cities are on the brink of war.

Can Bobby - suburban basketball star and all-around nice guy - help rid the area of marauders, and locate the legendary lost land of Faar, which may hold the key to Cloral's survival?

What listeners say about The Lost City of Faar

the narrator sounds like hes reading to a child. this is a young adult book. He has an annoying nasal drone and the only reason i keep listening is i cant find the trade book option. i loved the pendragon series when i was in school and i wanted to experience it again. Maybe this guy can grow on me. i hope so

To quote Bobby Pendragon, "I love that guy." That guy being Spader. I love his energy, I love his zest for life, and I love his flaws, because we all have them.

This second book in the Pendragon series sets the stage for events and technology found in just about every book that follows. The relationship between Bobby and Spader is key to the series, and the reason it is rocky is just as key. It is an action packed, fun underwater romp until Saint Dane manages to poison the planet's food suply, putting Cloral civilization in the ballance. All that stands between the forces of evil and the teritories salvation is Bobby, Spader, Uncle Press and the fabled city of Farr.

I think is says a great deal about Bobby that he adopted Spader's patented phrase,

It is that way it was meant to be.

As stated above, I love these books. I read them back in high school and was excited to experience them again through Audible. The story is still just as fun as I remembered and I’m definitely feeling the nostalgia. With that said, this narrator could not annoy me anymore than he does in this book. His attempt at different voices is abysmal. He makes everyone sound like a whiny little kid. Yes, I know the characters are teenagers, but come on, do better. He also says “short lived” with a long “i” instead of a short “i”...TWICE. Somebody tell him the proper way to pronounce the phrase so I can stop cringing.

keeps you at edge and also a tear jerker.who knows what will happen next

the reader continues to mispronounce a few words like lived instead saying lived like in livewire and instead of saying march eleventh he says march eleven story good enough to push through but disappointed I'm gonna have to continue to put up with these breaks in immersion. still gonna finish the books though

I love Pendragon. Read the series when it first came out and I love listening to it now!

loved every bit of this book. the narration was beautiful. I cried a few times. I'd recommend this to anyone!

The narrator is fantastic and you really get pulled into the world created. Great for all ages

Going back through these books keeps me sane at work

I read these books as they came out when I was in high school. I loved every minute of them. Performance-wise, the crackling audio from the underwater segments really hurt my ears. It seemed to be much louder than any of the other segments of the reading. Other than that, I thoroughly enjoyed everything else.