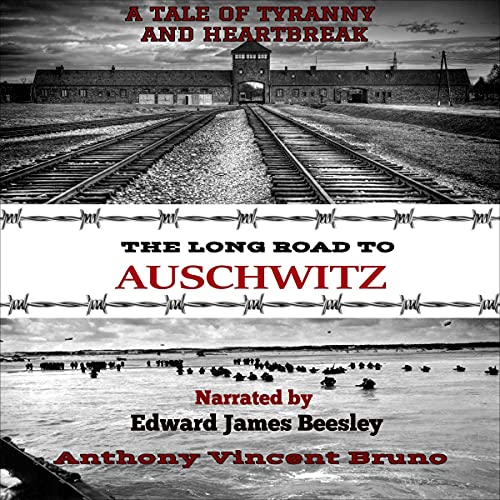 The Long Road to Auschwitz

A British soldier storming the Normandy D-Day beachhead, a man whose girlfriend had been deported to Auschwitz four years previously - "Whenever I see a German in black? I see a dead German in SS black."

The number one Amazon charts best seller The Long Road to Auschwitz explores the horrors of the Holocaust whilst looking to what would eventually end Nazi tyranny in Europe - the Allied soldiers landing on Normandy Beach.

Pre-war Europe - May 1939. A couple meet and fall in love on a Parisian street. Max is a British territorial soldier, and Zia is a Jewish girl from the south of France. Zia's grandmother is a wealthy socialite, privy to a dark secret that can harm the Nazi leadership.

After Zia is kidnapped by the Gestapo, and Max is hospitalized, he wakes up to find no trace of his beloved who he had planned to marry in England. The Red Cross suspect that she was trafficked across the border and delivered to Sachsenhausen Labour Camp at Oranienburg, not far from Berlin on the night of May 26, 1939. A criminal act, 343 days before the Wehrmacht attacked France.

June 6th, 1944 - four years later. Max is one of 150,000 Allied troops headed toward the Normandy beaches. He has two options: find the woman he could never forget or kill the people responsible for her death. From the very beginning, Berlin had ordered SS Hauptsturmführer Dieter Baumann to deal harshly with their VIP captive but never to kill her.

Through three concentration camps, ending in Auschwitz, Zia wishes she had been killed many times over. Traumatized, she has no idea that Max and a few unlikely friends are battling their way through Nazi-occupied Europe in a crazy attempt to rescue her.

This novel explores the dark depths that humans can sink to in times of war. It is for adults only, and even then, it is not for listeners of a sensitive disposition. Whatever you listen to in this novel is of extraordinary graphic Holocaust content. Consider this - it was immeasurably worse, a hundred thousand times so.

What listeners say about The Long Road to Auschwitz