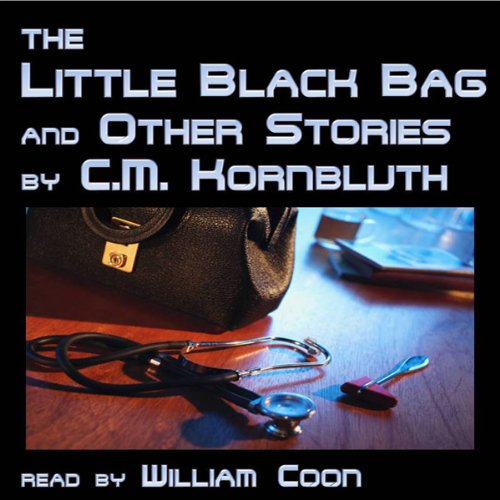 The Little Black Bag and Other Stories

Although C. M. Kornbluth died an untimely death at age 34, in his short career he managed to write dozens of short stories and a number of novels, often collaborating with other writers. The five stories in this collection are all his own, and show a writer at the height of his powers. In “The Little Black Bag” (1950), a disgraced physician finds salvation in a high-tech doctor’s bag that has inadvertently been transported from the future. “The Altar at Midnight” (1952) explores an unintended consequence of space flight, in which astronauts become physically deformed by their work in space, thus making them outcasts back on Earth. “MS Found in a Chinese Fortune Cookie” (1957) presents a humorous tale of a writer who finds enlightenment but ends up in an insane asylum. “The Adventurer” (1953) is a tale of political intrigue, in a future where our republic has become a dynasty for one ruling family. In “The Marching Morons” (1951), a follow-up to “The Little Black Bag”, a 20th-century man awakes in a distant future, where intelligence has been mostly bred out of humanity.

"A writer who had no peer in science fiction for examining the human condition in a multitude of moods." ( Booklist)
"A boundless talent." ( Frederik Pohl)
"Witty, pointed, telling, honest, gutsy." ( Timothy P. Szczesuil, editor of His Share of Glory: The Complete Short Science Fiction of C. M. Kornbluth)

What listeners say about The Little Black Bag and Other Stories

C.M. Kornbluth was a brilliant writer whose output was cut short by his untimely death. Even casual sci-fi fans have probably heard of The Little Black Bag or The Marching Morons (the first and last stories in this collection), and with good reason---they are great stories based on a very clever (and disturbing) idea. The other stories are also all great, but familiar to sci-fi fans. (Of course, the reason a story like "The Adventurer" is familiar is because it is so good---and thus it got reprinted and included in collections like this one.)

For the most part, these are not swashbuckling space-opera kinds of stories...really, more about the ways ordinary humans face an extra-ordinary future (or present) world.

What did you love best about The Little Black Bag and Other Stories?

It took me back to when I first read the collection when I was barely in my teens. Kornbluth was one of the reasons I fell in love with Science Fiction.

No favorites, really. The Marching Morons will always be my favorite of the collection because I see some of the same things happening in our societry now.

This is classic science fiction. Kornbluth died way before his time and I can only imagine the quality of work he could have accomplished.

i like to get these classic scifi when they pop up. I have read the 2 main stories before but wanted to revisit them. Black Bag is best i think and it was basis for a Twilight Zone featuring Burgess Meredith i think, don't quote me on actor, but a very good story. Last one, Marching Morons is also considered a classic but I felt it was ok. i do have to say reader, Coon, is not my favorite: rather pedestrian with limited vocal talents. not as bad as some, but uninspiring reading really.