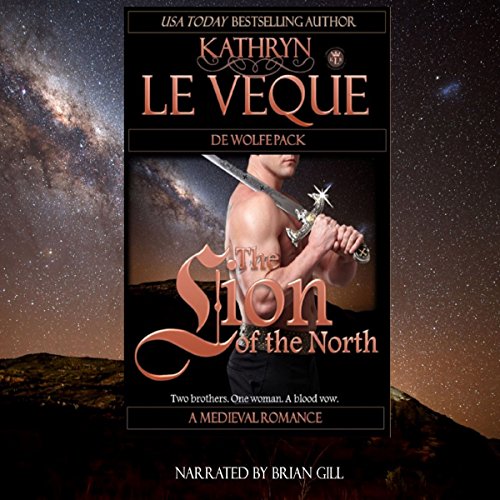 The Lion of the North

AD 1461 - Two brothers and the best of friends. One is betrayed and murdered at the Battle of Towton by men who were supposed to be his allies. The surviving brother, Sir Atticus de Wolfe, promises to seek revenge for his brother's murder. The Lion of Northumbria, heir to The Wolfe's legacy, is now unleashed and seeking vengeance. No one is safe until his bloodlust is sated.

But there is the matter of his brother's widow, Lady Isabeau de Shera de Wolfe. Will Atticus' vengeance stand in the way of falling in love with his brother's sweet and sexy widow? Discover the true meaning of the power of love in this great historical adventure of betrayal, passion, and retribution.

What listeners say about The Lion of the North

The Lion of the North

This story was wonderful. The narration was excellent. I loved the tale from the beginning. Attacus was such a good man. And loved his Father and his brother. His brother was killed and his last word to
Attacus was that he should marry his wife. Attacus was dubious about this and on arrival home told his brother’s wife that her husband had been killed and what had been said. Eventually they did marry and fall in love. They had lots of children. The story told of traitors and underhanded deeds, death and destruction. A very good story and I really didn’t want it to end.

I love Kathryn Le Veque, no other way to put it. I also love how she takes time to find her narrators. My favorite KLV novel(s) Crusader/Kingdom Come and I think that is because of Brian J Gill. I first heard him narrate those novels and was anxious to listen to this one. He had me in tears within the first chapter and laughing at the end. I loved his accents for the characters and I look forward to listening to him again. Great addition to the de Wolfe Pack Kathryn and great job in bringing this novel to life, Brian.

My All Time Favorite

I have purchased about half of all Le Veque's novels available on audible. Some I like, some I don't, but this one was amazing! I loved the narrators performance, and the story itself really moved me. At times I cried, laughed, was angry, and experienced real excitement. Everything about this novel and the performance brought great pleasure to me. The narrator's voice for Atticus was extremely hot. I replayed a few sentences just to hear his voice again.
I highly recommend it to all, but especial LeVeque fans. I couldn't stop once I started. That is unusual for me.

KLV hit another one out the park. This book did not come off as a romance novel. I felt sorrowful, shocked and even gasped at one point. I was on an emotional ride. You know that this book is a historical romance book, and you know how they usually end, but I did wonder how this book would end.
Brian Gill is a good narrator and I can listen to him again, however, he is not Brad Wills or Tim Campbell and that's ok.

Not for the soft hearted. Not a romance

I love most of Kathryn Le Veque’s novels. This story however is so violent, about heartless persons who are vengeful, angry and have no respect for life. They are quick to kill for any reason.

A brother's request for those he loved.

The death bed request from one brother to another, plus an explanation on the cause of the Knight's injuries, sets the brother on a quest of retribution against those that were traitors to their brotherhood of knights and the conquest of of a young widow, in keeping with her husband's last wishes.

A dramatic, and at times, suspenseful episode in the continuing saga of the descendants of William De Wolfe.

The Lion of the North roared in pain

Another great 5 Star book by Kathryn LeVeque, who never seems to disappoint her readers and their sense of romance amid tumultuous times, be they war, battles, feuds, mysteries or love, she carries you through engaging each of your emotions in the story. I laughed, I cried, I smiled and I grumbled, all the way through to the happily ever after. Brian J. Gill gave a 5 Star performance also with his superb vocal talents. He brought the characters to life and you could almost image them breathing and feeling all the emotions from pain to bewilderment to happiness. Excellent audiobook experience. I would gladly recommend to any of my friends.

I love this author....history based stories and no graphic sex. She has a perfect balance. Her knowledge of history and research really shines through, and the bloodlines she has created for these novels is astounding.

Would you consider the audio edition of The Lion of the North to be better than the print version?

This was such a well written story by Kathryn Le Veque and narrating performance by Brian J. Gill. I can not say that one was better than the other. The Lion of the North is one of the best out there.

Both characters of Atticus de Wolfe and Isabeau de Shera are equally evolving throughout the story. They both had to go through vast changes during this story. Isabeau looses her husband she was fond of, which in turn was Atticus' twin brother that he loved dearly.

What does Brian J. Gill bring to the story that you wouldn’t experience if you just read the book?

Brian J. Gill is one of the best narrators I've listened to. He has a vast range with his voice and I have not been disappointed in his performances.

Who was the most memorable character of The Lion of the North and why?

I think by just being a woman, I related to Isabeau de Shera de Wolfe emotions the most but my husband is an identical twin, so I related to the closeness of twins also.

I highly recommend this book and audible.

Pretty good story, but there is something about the accent that Gill uses that just doesn’t work for me. It’s honestly a little distracting.

I wasn't sure I would like the premise of one brother wedding his brother's widow but LeVeque REALLY made it work. For me it was an enchanting story. You will love the journey that these two lovers take! Narration was excellent!