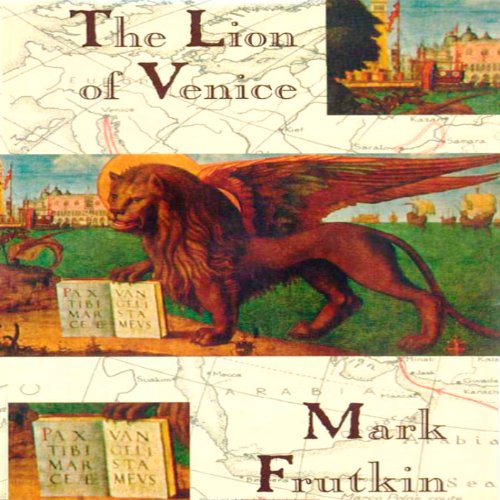 The Lion of Venice

The Lion of Venice

With a winged lion haunting his dreams, young Marco Polo moves through a gorgeous and magical 13th-century Venice as he prepares for a journey to Cathay and battles against an always-pursuing assassin in The Lion of Vencie by award-winning Canadian author Mark Frutkin. Actor David DeSantos conjures the world of this enchanting story with expert characterization and a loving treatment of Frutkin's colorful, extensive descriptions. Listeners will smell the salt air, see the maritime light reflecting off the magnificence of Venice, and feel the suspense of Marco Polo's dilemma.

This magical new audiobook by Governor General and Trillium Prize nominee Mark Frutkin, set in 13th century Venice and Cathay, is a dazzling fresco of shimmering language, brimming with golden tableaus of arid deserts and cobblestone alleys, the wafting scent of cardamom and the mystical trill of a praying friar. It is the story of Marco Polo, as he is about to set sail on an arduous and lengthy pilgrimage with his father, uncle, and faithful guide across the sun-soaked silk route - the rich path of the carpet-makers and the black seas of the Indian Ocean.

Doggedly pursued by a vengeful assassin of the Venetian Doge, Marco is eager to arrive in the promised land of the mighty Kublai Khan and bask in the safety offered by his royal legions. But while enjoying the myths of the new land, Polo is haunted by the recurring appearance of a winged lion, lurking behind his dreams and roaming the palace of his heart. Even upon his return to Venice, a naval battle, and capture by their rival Genoa - even as he languishes in an enemy jail cell recounting his trials to an incredulous inmate - there is always the heartbeat of the lion.