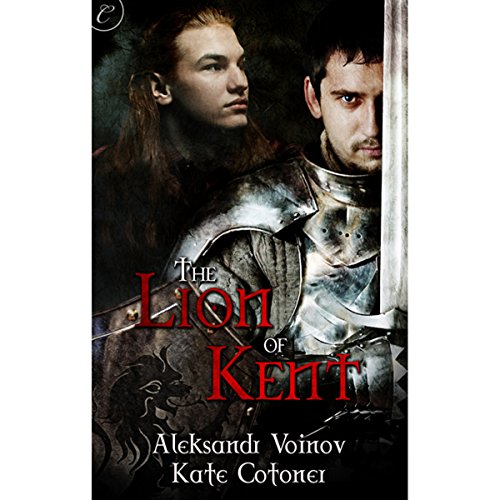 The Lion of Kent

Squire William Raven has only one goal: to finally receive his spurs and become a knight. When his lord, Sir Robert de Cantilou, returns from a five-year crusade in the Holy Land, William wants nothing more than to impress him.

After Sir Robert's return, noble guests arrive from France, bringing intrigue to the castle. William is oblivious to the politics, as he's distracted by nightly visits from a faceless lover, a man who pleasures him in the dark and then leaves, a man he soon discovers is none other than his master, Sir Robert.

But William can't ignore the scheming around him when he overhears a plot to murder Robert. He becomes intent on saving his lord and lover from those who would see him killed....

What listeners say about The Lion of Kent

Budding squire seeks to please his master. He does

Where does The Lion of Kent rank among all the audiobooks you’ve listened to so far?

This audiobook is at a higher rank of quality than what I've heard so far. There's a side plot with this and it gels well with the juicy parts. The description is great and the narration and narrative easy to listen through.

William Raven is my favourite character. He is the protagonist and I feel I related more to him due to age than any of the other characters.

He is able to distinguish different characters with different accents and pitches. He was able to imitate Steven in a way that reminded me of a friend of similar personality. He was able to portray Robert as a respectable figure to look up to. And his French accents, at times were a bit hard to follow as is true with the story's intent of a strong French accent.

It brought me back to my childhood where I would fantasise about being a squire/knight. It didn't really make me laugh or cry but it made me blush (to think if a lesser reaction).

Liked the audiobook art as it represents the visual.

The story is well-rounded. The length is what I would consider as an episode. There could be more and I wish there was more but as it is, it is good just as well.

Would you try another book from Aleksandr Voinov and Kate Cotoner and/or Philip Rose?

I would not try another book with Philip Rose as narrator. His performance ruined the book for me.

If you’ve listened to books by Aleksandr Voinov and Kate Cotoner before, how does this one compare?

I have not listen to books by Voinov or Cotoner before.

Would you be willing to try another one of Philip Rose’s performances?

Was The Lion of Kent worth the listening time?

Length, detail, background. It's short. The concept could have been fleshed out into a full length easily, giving the story a sense that it's not suppose to be a novella but just became one because the author didn't want to put in the effort.

What initially interested me was the summary about the secret lover and that alone could have been stretched to great detail and delight. There is one secret hand job and then William knows who it is. This is part of what I mean in that the book is lacking for little real reason.

Nothing was actually interesting about it. I suppose there is a bit of a twist but it wasn't actually exciting. And with nothing to raise the stakes, little can be picked out as the least interesting. The whole thing was just bland.

In that it was also bland, yes. The narrator was quite fast at the start, which I believe another reviewer mentioned as well. I would also classify him as a reader. He reads the story, and does do other voices for the different characters, but he doesn't act, embellish, or create a sense of connection. It never felt like you were really hearing the story from William's perspective, just being read one. I have listened to probably 100 M/M audio novels and this is truly one of the only times I've felt read to rather than just experienced the story.

Was The Lion of Kent worth the listening time?

If you get it in the Romance Package, I would say yes. There's not much medieval M/M out there overall and it isn't bad, simply bland. I think it did more to inspire ideas for myself overall. I would not have spent money specifically on this book.

Enjoyable, but HEAVY on the "love" scenes

For being such a short piece of fiction, there were a bunch of scenes with graphic sexuality and the "story" was great, although lacking; unfortunately, there was so little time devoted to things actually happening that I'm going to say the novella was missing a decent story structure. I also felt like the main character was pretty flat; all the reader really knows about him is that he is quick to anger. I'm not saying that this needed to be longer (although, it could've made a fine full-length novel), but there could've been less sex and more story.

I enjoyed myself as much as I could, though, so it will receive a B- for storyline and a B+ for narration. Sean Crisden, as far as I could tell from the point of view of an American, did a decent job with the British and French accents.

i wish this was longer.

I absolutely loved this book, but I wish it was longer. I think that the story had the potential to further develop the relationship between the two main characters but regardless was satisfying

It was okay? Just, really meh which is a shame. I really enjoyed another book from this pair, this one just didn’t really do it for me.

It is good to be the Lord of the Manor. This was a fun little romp into the past.

<strong>I’ve yet to read a Voinov book I haven’t liked, and this was no exception!</strong>

While short, the enigmatic characters drew me in—as they tend to do when I’m dropped in the middle of the action and not lectured at by one character or another who serves as the author’s soapbox or devil’s advocate.

Mystery man comes and jacks off our squire in the middle of the great hall after a party. Our Squire is a happy man with no thoughts other than to win his spurs and serve his master. Our Lord and Master is a bit more mysterious, having recently returned from a five year crusade in the Holy Land, where he apparently learned some techniques which served to invoke holy names.

One of the worst mm romances I've come across

I have no idea, someone who reads a book for the sex... The characters were sketchy at best, the story was almost non-existent and the romance was so meh, I can't say I thought I took it as a real romance.

What could Aleksandr Voinov and Kate Cotoner have done to make this a more enjoyable book for you?

Improve the characters, give them more personality, make the story more engaging and the romance more convincing.

The audio narrator was terrible throughout but exceeded himself even further with an unbelievably fake French accents, which sounded more like drunken Russian and indistinguishable English accents for the characters. I almost threw my iPod when I heard his voice for William. The supposed lion sounded like a twink who's put extra effort to sound even more effeminate than required!

It was really short!

The story was captivating and ended all too soon.

I really enjoyed the development of the main character. The character had long term goals beyond the relationship.

This could be an interesting book for someone who enjoys period pieces. I haven't managed to listen to it all and I have had it for a while. The narrator is great and easy to listen to, but I just don't enjoy the period piece flavor. It would be a great book if you enjoy historical pieces.