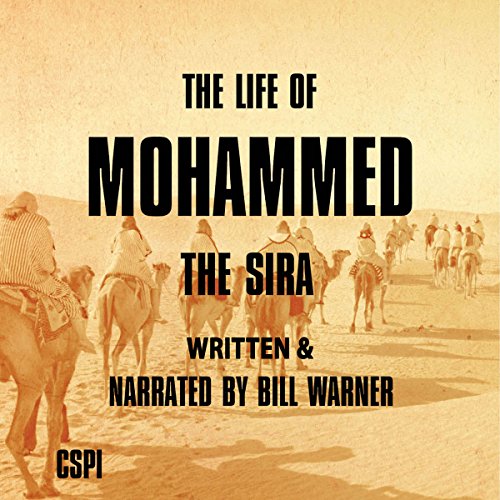 The Life of Mohammed: The Sira

The Life of Mohammed: The Sira is a condensed version of the biography of Mohammed, a man who became the first ruler of a united Arabia and laid the foundation for the empire of Islam. The Sira is not just a biography but it is also a sacred Islamic text of how devout Muslims should conduct their life.

Mohammed's life is an epic story. He was an orphan who rose from poverty to become the first ruler of all of Arabia. He created a new religion, new methods of war, and a new political system, including a legal code, the Sharia.

Mohammed was the world's greatest warrior. Today no one wages war in the name of Caesar, Alexander the Great, Napoleon, or any other military leader. However, every year many people die because of Mohammed. After 1400 years, Islam is still a powerful force in our world. Mohammed said that one day all of the world would live under his rule of law, the Sharia.

To understand Islam, you must know the life of Mohammed. The Koran commands that every Muslim is to live a life identical to his. The religion of Islam is about worshiping Allah exactly as Mohammed did.

The Life of Mohammed: The Sira is a unique book that provides a concise taste of Islam and is completely authoritative. The reference system allows you to verify all information in the source texts.

What listeners say about The Life of Mohammed: The Sira

Each to their own

Very well narrated, but as a so called Moslim I didn't find the material accurate and it was somewhat misleading.
But that said I guess it's a different point of view, so as the title says each to their own.

Demystifies The Biography of Muhammad

This is a highly credible simplification of Islamic source text without losing the essence or flow of the stories.

I discovered Warner many years after studying Islam. I had planned to create some books on the topic but then found that Warner had already created the books I would have created: Short, succinct, easy to understand and WELL researched!

I highly recommend his books.

just enough to put context to the Qur'an. It's a good listen but covers only the basics.

More of hatred-propaganda than a biography.

The aim of this book is, it seems, to create a fear and hatred of islam. As if you needed more of it. The author calls it political islam. He fails to point out that similar political and violent sides have been part of almost all other major religions of the world with perhaps Buddhism as an exception. (I haven’t read about Buddhism.) I mean I could write a similar book on all major religions, including my own, pointing out the dark sides, if that was the purpose and all facts would be verifiable.
This is definitely not the Sira, which is the biography of the prophet Mohammed, as this quotes figures of death and violence much after his life. An extremely low quality work which adds no value to someone who wants to learn.
Just for the records, I am not a muslim.
The narration part is worse than the content.

The Life of Mohammed

I don't know how true the information here is but I learned a few useful facts. Very short and fast presentation

Muslims ruled India for 400 years yet Muslims are minority proves not spread by swords.

Muhammad, based only on Islamic texts

The shame is: all those people who claim Islam is a “religion of peace” will refuse to read or listen to this book, because they believe they know the truth already.

But if you have not read the “trilogy” of Islamic texts, then you know nothing about Islam. And this book is based solely on the contents of the Sira, the biography of Muhammad.

I don’t want to know more, but now I need to.

It’s sad, so much effort to just mislead people, honesty is required when trying to illuminate minds.

Please read about Islam and Prophet Muhammad from Muslim Scholars who know and understand what they are talking about.

Looks like the writer just focused on the negative parts some of which are not true and i think the purpose of writting this book was to mislead people.

Excellent summary of the life of Mohammed

Dr. Warner has done the non-Muslim world a great service by publishing his summaries of the trilogy of Islamic holy book whose sole focus is limited to only those portions that deal with kafirs (non-Muslims).

Horrible one sided view, which has no sense in the whole book. It's like me writing a whole book on the looks of a person without even talking to him. What an utter nonsense..