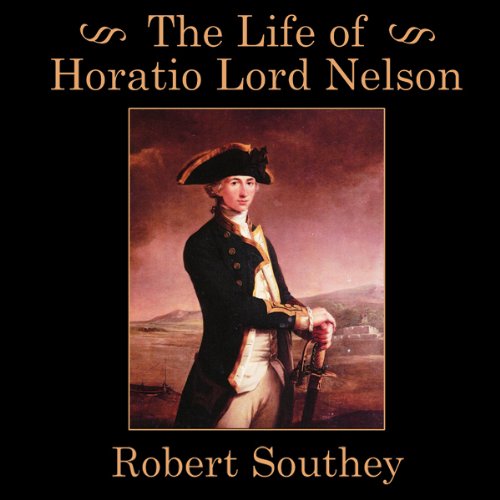 The Life of Horatio Lord Nelson

By: Robert Southey
Narrated by: Frederick Davidson
Try for £0.00

Having entered the British Navy at the age of 12, Horatio Lord Nelson achieved the rank of captain at the age of 20. As captain, he was quickly recognized as a magnetic and controversial figure. He triumphed at Cape St. Vincent and the Nile, but failed at Tenefife and Boulogne. With the glories of Copenhagen and Trafalgar yet ahead of him, his ardent passion for Emma Hamilton, the wife of a British Ambassador, cast a heavy shadow over his career.

Audacious in battle (he once ignored a superior's order to cease action at Copenhagen by putting his telescope to his blind eye and saying he could not see the signal) and winner of some of Britain's greatest victories, Nelson possessed an extraordinary amount dash and courage, thus rendering him one of history's great romantic figures.

What listeners say about The Life of Horatio Lord Nelson

Struggled with This One

I am sure the contents of this audio book are very interesting but I really can't get on with the accent and tone of the narrator. I've stuck with it for about an hour now but I am continually finding myself having to rewind as I have lost concentration on it. This has not happened with any of the other audio books I have downloaded. I'm sure it is just a personal thing but I would advise you to listen to sample recording carefully and ask yourself whether you can engage with that voice for a prolonged period of time.

Superbly narrated and written with care and feeling, this account of Nelson's life is inspiring as it is informative. Highly recommended.

The book was full of fact but not that interestingly put forward. The orator was monotone and you have to concentrate hard to maintain focus.

don't know what the story is like, can't get past the abysmal reading of it. the voice is so awful, cynical and dismissive, completely unlistenable.

Dreadful narrator. Couldnt listen to it any more. Never heard such an aggravating pompous voice before. Ridiculous.

The story was probably very interesting but the reading style was so effete and strange that it became risible and eventually i just could not listen.

It is a nice book of the life of Lord Nelson indeed but the narrator is the worst I have ever heard.

I am sure this could be a good book.

I bailed out after 3 hours as I had to concentrate too hard due to the outrageous accent of the narrator. Shame.

always love Frederick Davidson narrating, and this is a wonderful, if biased, biography of one of the most interesting individuals in modern British history.

I enjoyed the story and the narrator. I highly recommend this to all who have interest in the history of the British Navy.

Pompous presentation. No story to the story. Who was Horacio Lord Nelson anyway? A straight arrow whiner?

One of Great Britain’s finest

Nelson is a giant of history. One of Great Britain’s finest. Flawed but great. Wonderful life and excellent book!!

Read in true British style, this book gives inspiration without being maudlin. It presents a picture of a great, good man with all the hair on. It shows that men may be great and human.

I really wanted to hear this story, but the narrator with his excruciating nasal twang is an insufferable snob.

Not bad but dated

This was written in the later part of the 19th century. The style is dated and lacks the depth of today’s biographies like Chernow’s Grant. Battles are vague. The reading is almost a caracture but ok.

Interesting historical story. Not always easy to follow due to English grammar from that period.

a dry glorious romp through maritimes

For any with curiosity towards Lord Nelson this is about as good as you can get without diving into a a research project through the history books themselves. It does not give a great picture of Nelson as an individual but more a direct listing of his exploits. It glosses over many battles bit in the end you will weep for the man.