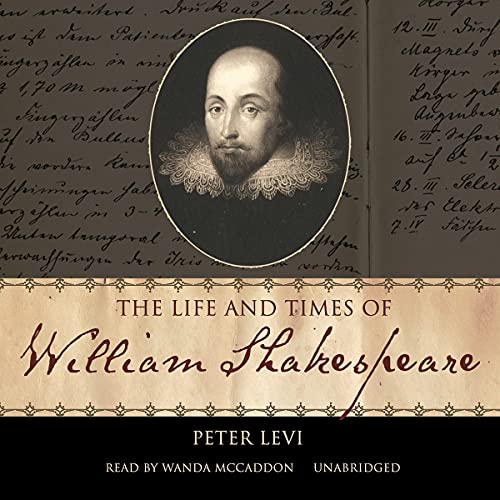 The Life and Times of William Shakespeare

By: Peter Levi
Narrated by: Wanda McCaddon
Try for £0.00

One of the most important books on William Shakespeare, this superb biography is both authoritative and extremely readable. It is the first modern biography of Shakespeare since the Victorian Age to pay full attention to his life and times, to his works, and to the numerous and subtle connections among them. Peter Levi emphasizes the background of Shakespeare's life - the local and national events that shapes his experiences, his family and friends, and the Elizabethan people with whom he shared his life and populated his plays. Bringing together new work and new discoveries and reexamining the famous legends about Shakespeare, Levi uses the writings of modern historians to shed light on the poet's life. This valuable work will be the definitive life of Shakespeare for many years to come.
©1995 by Peter Levi (P)1998 by Blackstone Audiobooks

"Highly accomplished but still accessible...incorporating recent knowledge not included in any of the previous studies." ( The Times (London))
"Levi offers something both fresh and affirmingly traditional in this impressive study." ( Booklist)

What listeners say about The Life and Times of William Shakespeare

That narrator is angry about something

I'm sure Wanda narrates very well in other contexts, but when this was recorded, she was giving it the bossy headmistress who is angry about something voice, and that is not what is needed. Somebody should have produced or directed this item with a greater thought. Shoddy Will be returning it.

Shakespeare and His Works Turned Inside Out

This book takes as given that William Shakespeare, of Stratford-on-Avon, Warwickshire, England was a real person and that he was the same person who conceived, wrote, revised, or collaborated with other identifiable persons with respect to the plays and literature within the Shakespeare canon. It deals in a credible way with the social and literary and political contexts of the period and their impacts on his works. It is not a superficial, glossy or pietistic treatment of the works or the man. It is the difference seeing a finished suit of clothes as outwardly put-on display versus turning it inside out to see how the suit was made and of what materials and who took part in the sewing. It dead point blank with the fact that only 18 of the 36 plays in the canon were in a public printed form before the First Folio of 1623 and that some of them appeared in markedly different versions sat different times at least 5 of the last 10 plays were acknowledged collaborations or revised by others. The morphology of the scripts and the reasons for them is a useful contribution to the ongoing controversy of the dating of the plays in practical terms. This is a 1989 book and does not deal with computer linguistics and attribution studies. The only downside to the audiobook is the performance. To my ear much to affected and at times unintelligible. I bought the hard cover book to read to help with those issues.