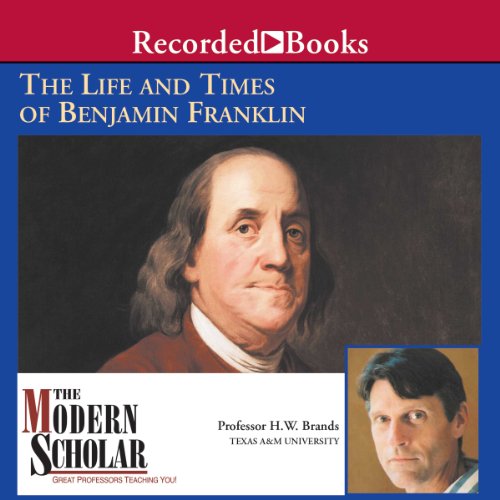 The Life and Times of Benjamin Franklin

The Life and Times of Benjamin Franklin

In this course, you'll study with noted historian H.W. Brands, the New York Times best-selling author of The First American, which also earned a Pulitzer Prize nomination. Brands is a scholar who truly captures the essence of Franklin and the times in which he lived. This course examines the life of Franklin and his influence on both American and world history. From his early days as a printer's apprentice to very nearly his last days, Benjamin Franklin's thirst for knowledge and his desire to share what he knew brought him to the forefront of a changing world. His contributions through inventions, scientific investigation, and political thought still echo more than 200 years after his passing. He remains the model of the American thinker - a man who was interested in nearly everything, and who pursued those interests with an admirable and contagious passion. To study Franklin's life is to learn not only the history of a single man, but to understand some of the most monumental changes in all of human history.

Yes, The most interesting content was delivered via lecture which I enjoyed and which facilitated remembering the details. I learned so much about BF.

What was one of the most memorable moments of The Modern Scholar?

Loved it. I look forward to buying Professor Brands books and listening to his other lectures. He is terrific!!!

I am blown away that one person could do so much. It is essential that our children learn about his life. BF embodies the American Dream, rising through his own efforts from poor beginnings to wealth and lasting greatness.

A Good Beginning for Franklin

This book is a very good start on the life and time of Franklin; however, the listener should also read The First American by Prof. Brands.

If I'm being honest, I've listened to this lecture series about half a dozen time. It's an easy go to book when I'm in need of something entertaining without app of the plot twist of a novel. I simply have a bad memory. The professor does a great job at keeping the listeners attention and Benjamin Franklin is a fun historical figure to learn about. Love and recommend it to anyone looking to learn as they listen.

lecture not an audiobook

The narrator in this course series was very engaging and did an excellent job in delivering information on Ben Franklin. He adds an enjoyable amount of personal facts.

I knew little about Ben Franklin other than the popular caricatures. This lecture series taught me a great deal. Lectures were substantive and articulate. First rate.

Great Man, but a biography is just better than a course

This was the first time I tried listening to a course, instead of reading a biography. I didn't like it nearly as much, as the conversational tone leads to much repetition and oversimplification.

Yes, it is the best history book I have ever read. It is well researched and full of information.

What would have made The Modern Scholar better?

It would have been better if it was AN AUDIOBOOK! This is a college lecture by a college professor. If you have not heard enough dull,rambling, trite, platitudinal lectures in your life, then this one is for you!

An audiobook about Benjamin Franklin