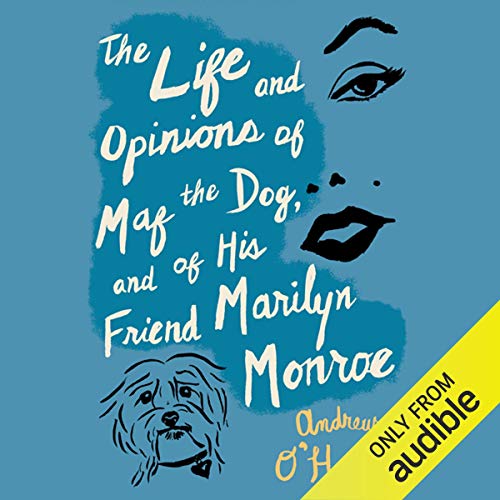 Most people can easily think of historical situations where they'd like to have been a fly on the wall, quietly observing the real story of exactly what took place in those famous moments. Andrew O'Hagan's clever novel shows us we would do better to be the dog in the room, if the room belongs to Marilyn Monroe. During the last two years of her life, the American icon really did have a Scottish Maltese poodle, Mafia Honey, who was given to her by Frank Sinatra. The author transforms this companion animal into a delightfully educated and compassionate commentator on a very well-known life, and Maf becomes a deeply elegant and engaging conversationalist thanks to the talents of narrator John Keating.

Irishman Keating effuses warmth and empathy, and a good bit of humor, into Scotsman O'Hagan's respectfully intimate portrait of a classic American celebrity. Whether Maf is accompanying Marilyn to rehearsals or psychotherapy, to parties or just to the living room, the dog is equal parts thought-provoking and protective. Keating does not let one salacious vibration slip into his distinguished dog, even on the occasion of Marilyn's first meeting with President Kennedy. Although all the rough and tumble brogue is music to the ears, Keating also shines with several famous character voices. Listen especially for his terrifying and sad portrayal of Frank Sinatra throwing a macho tantrum.

Keating does a gem of a job in balancing witty treasures with the treachery of fame. O'Hagan's foreign perspective on Marilyn Monroe is a welcome departure from the persistent notions that she was a weak-willed and shallow woman who relied on her striking good looks to get by in life, instead using Maf to reveal her as an emotionally astute but unfortunately lonely lady who still has some things to prove to herself. No wonder this book has already garnered O'Hagan the Glenfiddich Writer of the Year Award.

In November 1960, Frank Sinatra gave Marilyn Monroe a dog. His name was Mafia Honey, or Maf for short. He had an instinct for celebrity. For politics. For psychoanalysis. For literature. For interior decoration. For Liver Treat with a side order of National Biscuits.

Born in the household of Vanessa Bell, brought to the United States by Natalie Wood's mother, given as a Christmas present to Marilyn after she separated from Arthur Miller, Maf offers a keen insight into the world of Hollywood's greatest star... not to mention a hilarious peek into the brain of an opinionated, well-read, politically scrappy, complex canine hero.

Maf was with Marilyn for the last two years of her life - first in New York, where she mixed with everyone who was anyone (including the art dealer Leo Castelli and Lee Strasberg and the Actors Studio crowd), and then back to Los Angeles. Marilyn took him to meet President Kennedy and to Hollywood restaurants, department stores, and interviews. They also went to Mexico for her divorce.

With style, brilliance, and panache, Andrew O’Hagan has drawn an altogether original portrait of the woman behind the icon - and the dog behind the woman.

Philosophy and not enough of proper interest

From the sound-clip one would expect this novel to be an view of 1960's Monroe-Sinatra-Kennedy America as seen by a third party, in this case a dog. A clever concept?as no-one would think of moderating their views or actions with a canine in attendance, however, the work gets far too bogged down with the dog continually philosophising every subject that comes his way (and heaven help us when you get to Monroe and her therapists....) We both gave up listening at this point and have no?intention of returning. A sad disappointment.

Well, I loved the dog

I really enjoyed this book, the dog, Maf is a great story teller and I liked his philosophical approach to life. He is the antithesis of dogdom, which I found quite funny as a dog lover myself - no smells and bottoms for him! He is instead an insightful observer of all the humans around him and rather more cultivated than most of them. He loves and respects Marilyn and views himself as her protector. He has opinions of all the celebrities he meets from Sinatra to the Kennedys and sums up their characters and foibles well. Using a dog as the narrator allows the writer to distance himself from the characters and events of the story, to fictionalise them or not as the story unfolds. The book is well read and the narrators precise Scots accent is enjoyable, providing an old world contrast to brash world of Hollywood.