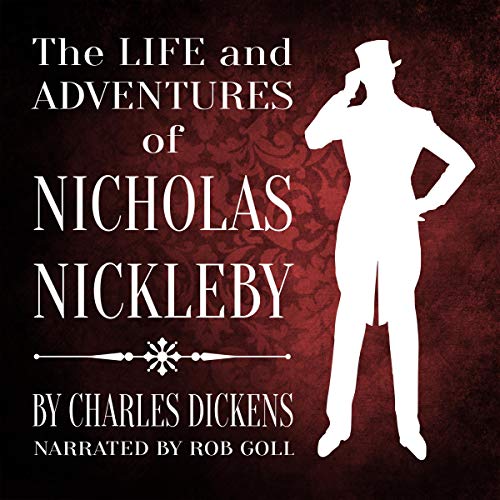 The Life and Adventures of Nicholas Nickleby

By: Charles Dickens
Narrated by: Rob Goll
Try for £0.00

Nicholas Nickleby's father dies unexpectedly after losing all of his money in a poor investment. Nicholas, his mother, and his younger sister, Kate, are forced to give up their comfortable lifestyle in Devonshire and travel to London to seek the aid of their only relative, Nicholas's uncle, Ralph Nickleby.

Ralph, a cold-hearted businessman, is reluctant to help his relations and has an immediate dislike of Nicholas, perhaps because he reminds him of his dead brother. Nicholas has secured a position, many miles distant, as an assistant to the cruel Wackford Squeers, master of Dotheboys Hall, a school for boys in Yorkshire. Kate meanwhile is apprenticed to the milliner, Madame Mantalini.

Melodrama, humour, and tragedy abound as the narrative switches between the changing fortunes of the noble-hearted brother and sister as they come to terms with life so very different from their Devonshire upbringing. A wonderful cast of villains, friends, and foes people the various locations and numerous adventures. In the words of Nicholas himself, ' there is abundance of incident, sprightly dialogue, strongly marked characters .'

The Life and Adventures of Nicholas Nickleby is the third novel by Charles Dickens, begun while he was still writing Oliver Twist. It was originally published in serial form from March 1838 to October 1839, and as a novel in 1839. The novel has been adapted for film and stage numerous times, one theatrical version even predating the completion of the novel, and more recently a celebrated two-part adaptation by David Edgar for the Royal Shakespeare Company in 1980.

What listeners say about The Life and Adventures of Nicholas Nickleby