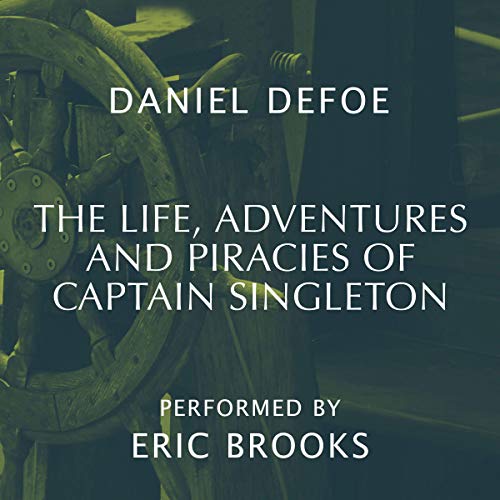 The Life, Adventures and Piracies of Captain Singleton

Daniel Defoe's Captain Singleton was only published one year after Robinson Crusoe, but in many respects it is a very different novel. Though both books realistically chronicle lives of adventure on the high seas, the protagonist of Singleton is an uneducated rogue, merchant, and pirate whose saga is divided into two distinct parts. Singleton's relationship with a Quaker named William Walters is also central to his first-person narrative.

Daniel Defoe (1659-1661 to 1731) was an English writer, journalist, and pamphleteer, who gained fame for his novel Robinson Crusoe. The Life, Adventures, and Piracies of Captain Singleton is one of his earliest novels. The narrative describes the life of an Englishman, stolen from a well-to-do family as a child and raised by Gypsies, who eventually makes his way to sea.

What listeners say about The Life, Adventures and Piracies of Captain Singleton

The story is not bad, but it is ruined by the narration. For some reason the reader felt it necessary to speak loudly and slowly, resulting in a stilted narration that sounds like he is trying to explain the story to children. It misses the liveliness and pacing that I fins in the best readers.

Its a good read!

This ia a grate read/ Audible. The reader talks is if he is in the late sixteen hundreds early 1700. Its kinda annoying. but it's true to was it was like back then. it's adventurous aa F and needs to be listened to