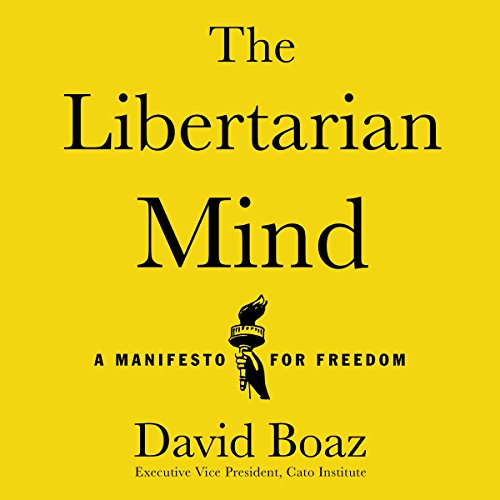 By: David Boaz
Narrated by: Scott Feighner
Try for £0.00

A revised, updated, and retitled edition of David Boaz's classic book Libertarianism: A Primer, which was praised as uniting "history, philosophy, economics, and law - spiced with just the right anecdotes - to bring alive a vital tradition of American political thought that deserves to be honored today". (Richard A. Epstein, University of Chicago)

Libertarianism - the philosophy of personal and economic freedom - has deep roots in Western civilization and in American history, and it's growing stronger. Two long wars, chronic deficits, the financial crisis, the costly drug war, the campaigns of Ron Paul and Rand Paul, the growth of executive power under presidents Bush and Obama, and the revelations about NSA abuses have pushed millions more Americans in a libertarian direction. Libertarianism: A Primer, by David Boaz, the longtime executive vice president of the Cato Institute, continues to be the best available guide to the history, ideas, and growth of this increasingly important political movement - and now it has been updated throughout and with a new title: The Libertarian Mind.

Boaz has updated the book with new information on the threat of government surveillance; the policies that led up to and stemmed from the 2008 financial crisis; corruption in Washington; and the unsustainable welfare state. The Libertarian Mind is the ultimate resource for the current, burgeoning libertarian movement.

What listeners say about The Libertarian Mind

A good book, well read. But I think the audio needs adjusted. There seems to be a quiet but noticeable high-pitched noise throughout.

Clearly and concisely conveys the conscious workings of the Libertarian mind. To gain a better understanding of what this philosophy entails, I can't recommend this book highly enough

A book every American should read

This is a book that every American should read to understand what it will take to get back to the original intent of the constitution of the United States.

A must read for all

This is a great primer that really lays the foundation for Libertarian thought. A must read for all!

Everyone should read this book

exactly how society should be. this book is great for anyone that wants to learn more about libertarian values or how to debate people who are for the ever expanding state.

The book provided a lot of insight into the libertarian mind (no pun intended) and was full of strong arguments for me to contemplate.

This is a Must Read Book and/or Must Listen to Book before you Vote!

Please Read or Listen to this Must Read Book and/or Must Listen to Book before you Vote! You may Learn a Little or a Lot from it! I know what I learned and Hope you Learn at least some of what I learned! Has the Big Government Helped or Hurt You in Your Life? Do you like Paying High Taxes for everything to the Government? Think what would be best for Everyone in this Country and Vote for More Freedom and Less Government in our lives!

I loved this book. It put an understanding about my political view that I didn't know how to express. I recommend it to everyone.

There aren't any revolutionary or ground- breaking ideas in this book, but it's a good overview of Libertarian principles.

Absolutely the best book on Libertarianism I've ever "read". I'll be having my kids listen to this, and it will remain in my rotation.

This Book clears up fragmented American political logic. It gets better and better as you go.