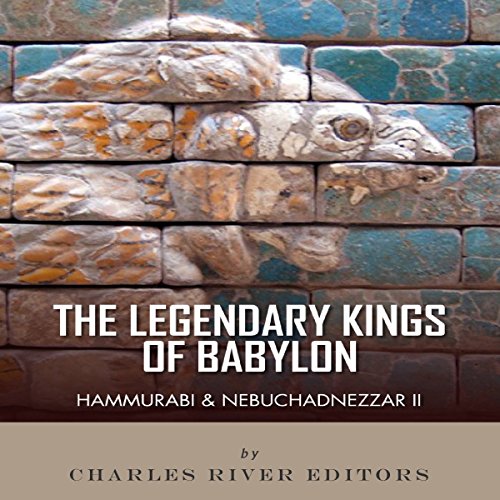 The Legendary Kings of Babylon: Hammurabi and Nebuchadnezzar II

By: Charles River Editors
Narrated by: Nate Daniels
Try for £0.00

The Babylonians were one of the earliest of history's great ancient civilizations, and the most famous Babylonian of them all was Hammurabi, who came to the throne as the first king of the Babylonian empire around the beginning of the 18th century B.C. Hammurabi had a long and fruitful reign that saw him consolidate most of Mesopotamia under his control, but he's best known today for Hammurabi's Code, one of the earliest known code of laws in human history. Inscribed on stone tablets, Hammurabi's Code was found over 3,500 years later in the early 20th century, making him one of antiquity's most famous men.

Babylonian culture, including art, architecture and literature, flourished during his reign, and Hammurabi (or the scribes in his employ) wrote enough public royal inscriptions and personal official letters to store in museums across the world. There are also many letters from other contemporary rulers that make reference to him or to significant events during his reign. The large amount of documentation available, both from and about him, has allowed modern scholars to paint a colorful picture of the famous king and the various facets of his life.

Alongside Hammurabi, Nebuchadnezzar II is remembered as one of Ancient Babylon's most influential kings. Nearly 1,000 years after his famous predecessor, Nebuchadnezzar oversaw the expansion of the Neo-Babylonian Empire during the 7th and 6th centuries B.C., which placed him in conflict with Egypt and the ancient kingdom of Judah. His ruthless conquest of Judah resulted in the destruction of Jerusalem and the entire kingdom, and it ultimately earned him notoriety in the Old Testament, where he is mentioned in the books of Jeremiah, Ezekiel and Daniel.

The Legendary Kings of Babylon chronicles the lives, legends, and legacies of the famous Babylonian kings.

What listeners say about The Legendary Kings of Babylon: Hammurabi and Nebuchadnezzar II

Start where audio wants to start even though I tried to change chapter several times.