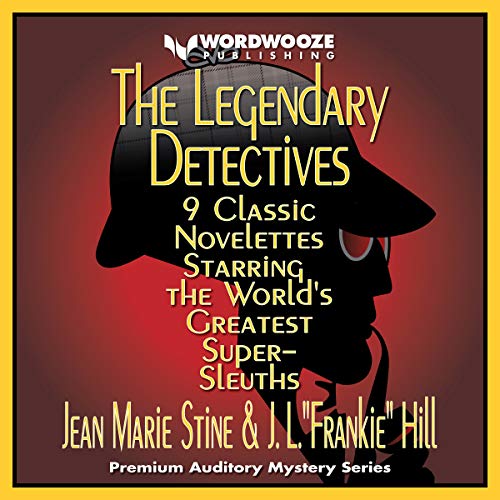 There are hours of listening pleasure in The Legendary Detectives: 9 Classic Novelettes Starring the World's Greatest Super-Sleuths. You'll find gathered together a clutch of classic mysteries starring nine of the world's most famous fictional sleuths: The Thinking Machine, the Old Man in the Corner, Max Carrados, Morris Klaw, Sanders of the River, Reggie Fortune, Father Brown, Craig Kennedy, and, of course, the greatest and most famous of them all - Sherlock Holmes.

The authors represented are equally legendary for their contributions to detective history: Edgar Wallace, Baroness Orczy, Jacques Futrelle, Arthur B. Reeve, Sax Rohmer, G. K. Chesterton, H. C. Bailey, Ernest Bramah, and Sir Arthur Conan Doyle. Once the top-selling detective characters of mystery's Golden Age, the adventures of these legendary detectives have for the most part sadly lapsed out of prominence - yet, their names still echo as legends among mystery fans! This exclusive anthology edited by Jean Marie Stine and J. L. "Frankie" Hill brings a sampler of their adventures back for modern mystery fans.

what a dreadful waste of money - couldn't listen to such a bad narrator aagh!

A Great Intro to GAD Stories

<strong>The Legendary Detectives</strong>, edited by Jean Marie Stine and J.L. "Frankie" Hill gives listeners nine stories from the Golden Age of Detection, written mostly by British authors, but also by Americans too. All were well- known in their day, though only some are commonly read today. These stories serve as a good introduction to readers who may want to look up the authors for further reading. Each story begins with a brief biography of the author and the methods of detection used in her or his works.

"The Long Barrow" by H.C. Bailey. <em>Detective: Reggie Fortune</em> -- Isabelle Woodhall approaches Mr. Fortune because someone has been following her, and she finds the bodies of dead animals wherever she goes.

"The Scarlet Thread" by Jacques Futrelle. <em>Detective: The Thinking Machine</em> -- Reporter Hutchinson Hatch recounts a situation to The Thinking Machine in which broker Weldon Henley keeps finding the gas lights in his home blown out, but with the gas still going, almost murdering him.

"The Magic of Fear" by Edgar Wallace. <em>Detective: Sanders of the River</em> -- A British ship going to Africa encounters local magic that reveals evil.

"The Ghost at Massingham Mansions" by Ernest Bramah. <em>Detective: Max Carrados</em> -- Lewis Carlisle has been hired to investigate a ghost and invites his friend, the blind detective Max Carrados, to join him.

"The Eye of Apollo" by G. K. Chesterton. <em>Detective: Father Brown</em> -- Pauline Stacy fell to her death after writing a will giving her fortune to a cult leader, who was on top of the roof at the time of her death. Father Brown gets to the bottom of the case.

"The Ghouls" by Arthur B. Reeve. <em>Detective: Craig Kennedy</em> -- Detective Craig Kennedy gets involved in a case where Montague Phelps dies with a high life insurance under suspicious circumstances. Kennedy uses the greatest science available at his time to solve the case.

"The Ivory Statue" by Sax Rohmer. <em>Detective: Moris Klaw</em> -- Detective Moris Klaw investigates the disappearance of a sculpture made of an ancient Egyptian girdle full of valuable gems.

"The Adventure of the Lion's Mane" by Arthur Conan Doyle. <em>Detective: Sherlock Holmes</em> -- Sherlock Holmes narrates this story in which the detective reaches a man on the beach whose dying words are "the lion's mane."

Addison Barnes performs the audio edition of this anthology. She does a strong job of handling the works of both British and American writers and ably uses the accents of British, American, African, and French speakers. Her male voices come across especially convincingly.

The nine stories in <strong>The Legendary Detectives</strong> have interest both in themselves and for their historical context. The science used in some of the stories may seem strange to us now, but it was accepted as legitimate by researchers of the times when the stories were written. I especially found ridiculous the methods used by Sax Rohmer's Moris Klaw, who sleeps where the crime took place and is given a mental image of the action that took place there. However, the introduction states that scientists believed in such so- called science when the story was written. I recommend this collection for those interested in the Golden Age of Detection and give it five stars.

<strong>Disclaimer:</strong> I received this book for free for review purposes, but that had no influence on the content of my review.