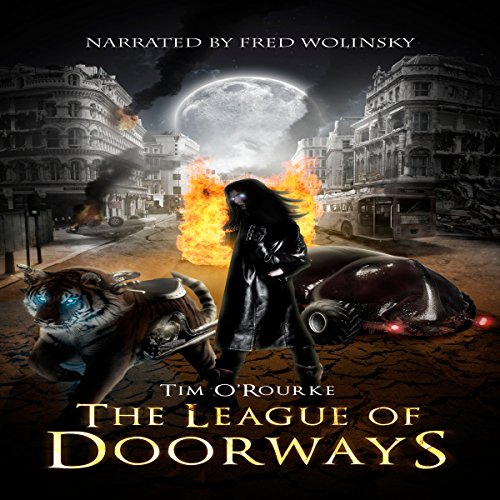 The League of Doorways (A Book of Vampires, Werewolves & Black Magic) (The Doorways Saga 2)

By: Tim O'Rourke
Narrated by: Fred Wolinsky
Try for £0.00

With a werewolf and a vampire for company, Zach Black makes his way across a vast apocalyptic wasteland in search of the box which contains the Heart of Endra. In the desert, they stumble across a mechanical man who tells Zach and his friends that if they want to reach the box, they will have to cross a desolate land inhabited by terrifying creatures, which have been smuggled from the other side of the doorways.

But with a traitor amongst his midst, Zach's every step is being planned and manipulated by the evil sorcerer, Throat. As Zach makes his journey, little does he know he is being led into a trap which could ultimately lead to his death and the destruction of the world he has promised to save.

"I really did love this tale. It reminded me of Lemoney Snicket and The Spiderwick Chronicles with the detail of a Neil Gaimen novel. It has all the aspects to become the next great classic." (Greta, Paranormal Wastelands Book Reviews)
"This novel has a little something for everyone, and I feel like this adventure story and the writing style are similar to that of Tolkien and Lemony Snicket." ( A Book Vacation Book Reviews)

What listeners say about The League of Doorways (A Book of Vampires, Werewolves & Black Magic) (The Doorways Saga 2)

What made the experience of listening to The League of Doorways the most enjoyable?

I really enjoyed the modified beasties and the mechanical men. The narrator went the extra mile with the voice for Dr. Faraday.

We had multiple viewpoints, and plot lines, making the story more interesting. We even got to knock around in the decrepit heads of the bad guys for a bit.

I love his werewolf voices, and the voice for the mechanical man Dr. Farday was great. He went the extra mile with that one.

We know from the beginning that there is a spie/traitor among the good guys. At the end, there was a twist and that twist was a particularly poignant moment in the story.

Zach Black and his motley crew pick up just where Book 1 ended. Much of their time is spent trying to cross a desiccated and abandoned war zone. William Weaver the werewolf and Neanna the vampire keep him company as they continue their quest to find the Heart of Endra. Meanwhile, Anna Black is still in the hands of the ghoulish pirates along with uncle Thandel. Throat and his evil sister, Delf, continue to make plans to take out Zach and his companions.

I enjoyed this book more than I did Doorways (book 1 of the series). We have a new character, Dr. Faraday, that Zach & crew meet in the desert. He’s a mechanical man and has plenty of talents along with mysteries about him and how he came to dropped in the middle of a desert, turned off. We also have Anna playing a more pivotal role, along with Willow Weaver (William’s mother) and Delf playing bigger roles (in Book 1 we were just introduced to them). In this book, we get to follow a few plotlines, instead of just one, as these secondary characters have tasks and challenges of their own.

And then there is this pretty cool thing: The mechanical men made a mistake some time back. Fascinated with the animal life of Earth, they brought several species through before they realized that Endra didn’t act as an exact mirror. They were changed when they came through, creating strange, wondrous, and often terrifying modified beasties, such as the semi-mechanical tiger motorcycles. I quite enjoyed this part of the tale because it was beautiful, sad, and creepy all at once.

Then we have the bad guys. Searching for eternal life and beauty, they have fallen into crustiness and flatulence. While Throat has become a shadow of the mage he once was, his sister Delf has open, maggot-riddled sores, horrid breath, and gas. They are both uniquely twisted and disgusting in obvious and subtle ways. Though I have to say that Delf does seem to care for her mount, a large dog, who she feeds maggots to.

While all this is going on, Willow went on a quest to find the League of Doorways and ask their assistance in saving Endra. She finds Wally, an old family friend. I don’t want to spoil how her quest turns out, but let me say that it wasn’t simple and the answer wasn’t what she expected.

Up front, we know there is a concern that a traitor exists in Zach’s little group. He’s vigilant, keeping his eyes on a possibility. The ending wasn’t what I expected and I look forward to having Book 3 on audio to continue the tale.

The Narration: I enjoyed Fred Wolinsky’s performance more in Book 2. I think his polish of his character voices increases with each book he does. Once again, he had a variety of voices, both male and female, both human and nonhuman, and each was distinct. He did a great mechanical voice for Dr. Faraday and I really appreciate the extra effort that must have gone in to that. Zach still sounded more like a 12 year old boy instead of one for a boy on the cusp of manhood but I don’t think this should deter folks from enjoying this series.

Would you consider the audio edition of The League of Doorways to be better than the print version?

I have not read the print version, but there were things in the audio that really brought it to life for me, so I would imagine the audio has even more to offer than the print.

Have you listened to any of Fred Wolinsky’s other performances before? How does this one compare?

I have heard a few of Fred Wolinsky's books, and they are all good, but this series is the best that I have heard from him. His narration in this book is just as good as Book 1 of the series. He has a clear voice, distinguishes each character with personality as well as voice quality. His narration is full of drama and emotion.

There were some funny as well as touching moments, but mostly this book was exciting and fast moving.

This continues the adventure from Book 1. It follows many twists and turns, with some real surprises. It leaves us on a cliff-hanger, and I can't wait for Book 3.

What did you love best about The League of Doorways?

The way that the author brought all the groups, each with their own agenda, to the same place, ready for a final confrontation.

What was one of the most memorable moments of The League of Doorways?

At the very end of Book 2 when it is revealed that Leana may have been the one that sold out her friends.

Have you listened to any of Fred Wolinsky’s other performances before? How does this one compare?

When Jack Black is finally united with his sister but can't seem to help her.

Please hurry and finish Book 3! Jack needs to save his sister, and their uncle must pay for his crimes.

There is another cliffhanger at the end - again

The second in this trilogy picks right up where the first ended, or didn’t since the author is an apparent fan of the cliffhanger. While I understand the reasons for them, in titles geared to younger readers I am NOT a fan (not much for myself either) as I believe that each story should have some conclusion that makes you curious about what next, not struggling to sort out a long or drawn-out plot point. But that is really my biggest issue with this story: again O’Rourke manages to build a world that is solid and inventive, and give us plenty of action to follow.

There are new characters: good, bad and ugly to get to know again in this story, while some carry-over from the first book does happen, this is really a solid deepening of the characters we met in book one: and you CANNOT jump into this story expecting to follow along. You will be hopelessly lost as the action starts with very little breathing time, and we jump right in to it all: not a ton of catch up or background from the first book. Zach is marginally more developed in this story – but it is definitely action, not a character driven storyline, and if you are wanting some unique twists, surprises and plenty of new puzzles to work out.

Fred Wollinsky’s narration was better in this than the first: or perhaps I was more accustomed to his performance and voicing. His creation and consistency with Zach’s voice is spot on for the character, and his variations in pitch, tone, accent and delivery are clearer as he navigates through a daunting myriad of characters, each bringing their own intention and threat to the story.

Part two is down, and this trilogy will end with the next book, The Queen of Doorways. There is another cliffhanger at the end of this story: be warned. I did listen to books one and two in succession, so the characters and voices were fresh and while not easy to recall, I found them less confusing in the second round. Perfectly suited for ages 12 and up, there is something to please the fantasy fan who prefers unique worlds and action.

I received an audioBook copy of the title from the author for purpose of honest review. I was not compensated for this review: all conclusions are my own responsibility.

Book 2 continues on a roller coaster ride of an adventure with ore fascinating creatures, characters, and surprises -- plus a mystery ensues. Fred Wolinsky's narration is top notch, just like the first book. The book really comes to life. I can't wait until the third book is out!