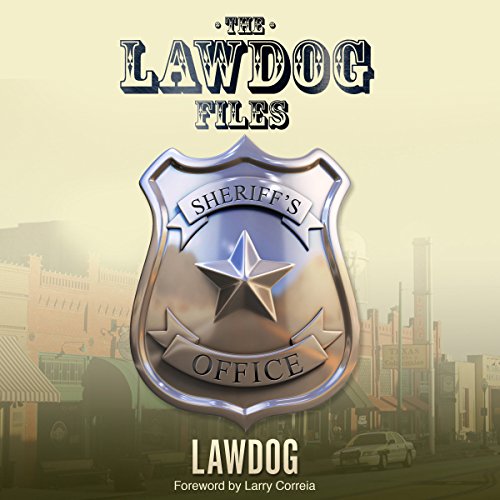 LawDog had the honor of representing law and order in the Texas town of Bugscuffle as a sheriff's deputy, where he became notorious for, among other things, the famous Case of the Pink Gorilla Suit. In The LawDog Files, he chronicles his official encounters with everything from naked bikers, combative eco-warriors, suicidal drunks, respectful methheads, prison tattoo artists, and creepy children to six-foot chickens and lethal chihuahuas.

The LawDog Files range from the bittersweet to the explosively hilarious, as LawDog relates his unforgettable experiences in a laconic, self-deprecating manner that is funny in its own right. The audiobook is more than mere entertainment, it is an education in two English dialects, Police and Texas Country. And underlying the humor is an unmistakable sympathy for society's less fortunate - and in most cases, significantly less intelligent - whose encounters with the law are an all-too-frequent affair.

Interesting view into the world of law enforcement

These stories are enjoyable. I didn't laugh out loud, but stayed interested and often amused while listening to this. There was one story that was poignant, about the old man with Alzheimers from the nursing home. That was the best one in the book.

I have the other book in my Wish List and like the writing enough that I'll probably buy it to see what other tales are told. After a lifetime of reading, it is evident that this is not professional writing (yet), but the author makes no such claim, saying this is a collection of stories told in blogs. And that is fine. The stories are interesting and give a different perspective of life. And, that's why we read isn't it?

What did you love best about The LawDog Files?

Narrator was perfect for the book, but probably not for most other genres. Stories were entertaining and didn't overburden the reader with superfluous nonsense yet still built the small-town feel.

"Now dawg, what have I always told you 'bout workin' smarter, not harder?"

An outstanding version of some great stories!

Would you listen to The LawDog Files again? Why?

I've already read the ebook and listened to the audiobook twice

What about David T. Williams’s performance did you like?

His voice, accent, and characterizations were outstanding. They were a perfect fit to LawDog's stories.

If the chapter where LawDog is looking for an old man who has wandered off dosn't raise a lump in your throat, check your pulse