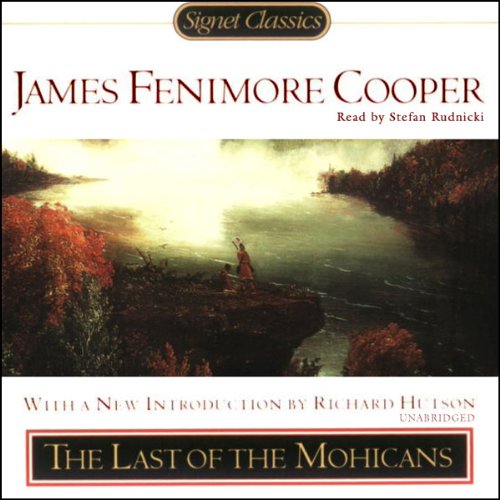 The Last of the Mohicans

By: James Fenimore Cooper
Narrated by: Stefan Rudnicki
Try for £0.00

The setting for this historical romance is the French and Indian War, a war which pitted England and its American colonists against the French and their Indian allies. Cora and Alice Munro, the daughters of an English commander, are on their way to join their father. Escorting them through the wilderness are Alice's fiancé, Major Duncan Heyward, and the treacherous Indian Magua, who secretly serves the French.

Magua's plan to betray the party to the Iroquois is foiled by the scout Hawkeye and his companions, old chief Chingachgook and his son Uncas, the "last of the Mohicans." Through a series of fights and rescues, this trio of loyal friends, who embody a code of manly honor and heroics, defend the virtuous sisters from Magua and his Iroquois thugs.

This timeless tale will enchant readers with its panoramic view of America at its conception.

"[Cooper's] sympathy is large, and his humor is as genuine - and as perfectly unaffected - as his art." ( Joseph Conrad)

What listeners say about The Last of the Mohicans

Not the story I was expecting but a good listen

I chose this book because I love the film and wanted to know more about it. After reading previous reviews, I was expecting the archaic language and found it rather lovely but I was surprised by the relative importance of characters in the book. This isn't a love story between Cora and Hawkeye at all and if you've ever wondered about the significance of the title, that makes a lot more sense after listening to the book. I really enjoyed the story and I hope someone will make a truer adaption one day even if there are aspects relating to race that will have different resonances to modern audiences.
The narration is fine and it can't have been easy delivering some of the Victorian phrases but I did find it portentous in places.

A great book for those long journeys.

This is definitely a book I could not have read. However, as an audio book it is eminently listenable, although I do have to admit to having zoned out on the odd occasion. The language is very Victorian in tone and, therefore, very flowery – using several words where one might do (by today’s standards). Having said that the story is gripping and the ending somewhat unexpected (I need to watch the film again). The characterisation is wonderful, the settings lavishly described and the plot compelling. If I do have one criticism it was the series of chapters where some of the main characters disguise themselves in the skin of a bear – it was simply too implausible. The narration by Stefan Rudnicki is wonderful, if somewhat soporific at times. This audio book is definitely a recommendation for those long journeys, unless you cannot cope with verbose Victorian-style prose.

A must read! It was a great movie and a even greater book. I stayed captivated though the entire book.

Loved the movie, think I liked the book when I read it 30 years ago, however, this was very boring narration, I recommend you look at other versions of this book.

The movie is better

This is a good story but somewhat unbelievable. Who in their right minds would try to usher two young girls through hostile territory, through lands rife with hostile Indians, their father's sworn enemies and not insignificantly, hostile terrain and expect to keep them safe just so they could see their father? And this in the 18th century? I mean, I know they missed him but the risk to their lives seems to make this journey counterintuitive. But on the other hand, the characters were so interesting and their relationships so socially important for the times that it compensated for a lot of my misgivings. I learned a lot from them.

It didn't end the way I wanted it to, of course (who doesn't love a happy ending?), but it was the only way it could end and be reasonably believable.

The biggest problem I had with it though was the fact that it is extremely difficult to read. The language Cooper uses is somewhat archaic and extremely wordy which makes it hard to follow. If I were determined to love this book, I would read it slowly and savor every sentence. I think that is the only way to really "get it".

All in all I'm glad I slogged through it but I will definitely not read it again. Side note: this is one of those rare stories for which the movie is better than the book.

A word about the narrator. He has a great voice and a pleasing way of reading. His characterizations lacked a bit to be desired though. Some were pretty good, but others were just sort of non-existent. I would love to hear him read non fiction.

One of the greatest novels of all time, and along with Tarzan Of The Apes, Treasure Island, The Three Musketeers, Gulliver's Travels and Call Of The Wild, one of the great adventure stories!