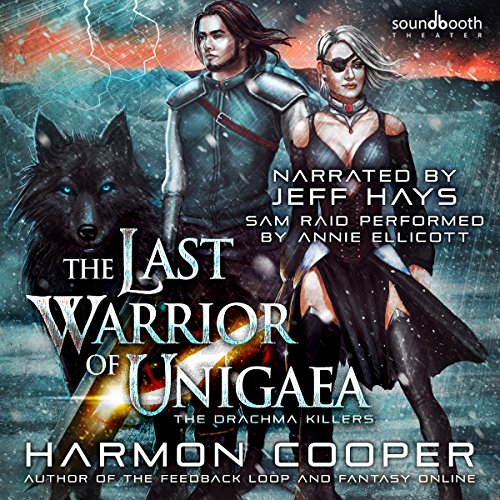 The Last Warrior of Unigaea

The reason that Oric Rune became a Player Killer continues to loom at the back of his mind as he makes his way north with Sam Raid and Wolf. All is well until an ambush throws a wrench in their plans, forcing Oric to come to grips with his digital existence, and the fragile lives of those closest to him.

With the Red Plague spreading, and the denizens of Unigaea becoming increasingly hostile, Oric must decide if he should go after those who have ambushed and betrayed him, or ride north to the Rune Lands and address the Red Plague head on.

Narrated by Jeff Hays and Annie Ellicott, the Drachma Killers has all the action and suspense you've come to expect from this best-selling series!

What listeners say about The Last Warrior of Unigaea

Level up on Audio LitRPG

Book 2 of the Unigaea saga continues with many a surprise as this one is full of heartstrings being pulled and emotional manipulations as we race across the continent to get our revenge against the evil Drachma killers and save the world from the Red Plague.
Due to having 2 female main characters Anne Ellicott works her vocal magic with the ever present Jeff Hays to make a masterful audio piece of work.
A job well done and sure to satisfy any fan of LitRPG

Our heroes are back, and plan on taking out the source code bomb, they just seem to go about doing so a bit more liesurely than you'd think. That isn't to say that the book isn't full of action, and rat bag sonnof a biz someone does die, and you will feel every stb in the heart that you think you will when they pass on. The book is still humorous, full of jokes about sex, packed full of action, and you will love every minute of it. This book will really make your mouth water for the next one, as there is still a lot of work left for our survivors to do.

Cooper is a really great story teller, and he knows the buttons to push. This is not a by the numbers story by any means, and he keeps the RPG aspects alive to a point hat you would think this genre has been around forever.

Hays nd Ellicott just crush the narration. I have no qualms admitting that Hays is my favorite narrator, and everything he does just slays. He totally kills it here again. Annie, his accompaniest in this duet proves she can stand side by side with a master like Hays, and not only hold her own, but push him to do better. They really work well together.

amazing short stories. should really take the first and second book and merge them into one incredible story.

You guys just keep getting better

It seems like each of Harmon's books gets better than the last. I never felt there were any dull or filler pieces in the book. The ending was great though it has me wishing the next book were out so I could dive right in.

Jeff Hays was his usual exceptional self. Annie Ellicott provided an exceptional voice for the female characters. She had a much bigger part in this book and I hope she continues in more works with Jeff.

Another excellent book from the prolific Harmon Cooper. I couldn't stop listening. Seriously, I started listening this morning and finished up this afternoon. The Drachma Killers is the second volume in The Last Warrior of Unigaea series, one of Harmon Cooper's numerous (and often interconnected) LitRPG novels. Without posting any spoilers, the book continues the journey of Oric and his faithful companion Wolf as they seek to get revenge for past atrocities as well as agreeing to help save the world from the dreaded red plague that threatens to destroy all of Unigaea. The action is fast, furious -pretty much nonstop- and the ending will leave you dying to know what happens next. Of course it wouldn't be a Harmon Cooper novel without a healthy dose of humor as well.

As always Jeff Hays delivers a fantastic performance, once again proving he is one of the best narrators working today. Jeff is once again joined by the talented Annie Ellicott who has an expanded role this time around, assuming responsibility for multiple roles. She and Jeff are amazing together, and I hope they'll continue to record together in the future.

Cooper and Hays are a great pair.

For transparency, I was an advanced listener tasked with giving an unbiased review of this book. If you listened to the first, you understand this is the story of a boy and his dog. Well, a player killer and his wolf. I won't go into the story except to say I found if profoundly satisfying. Cooper blends adventure, gaming, and humor into a mesh that is sure to please fans of fantasy, gaming, litRPG, and humor. The narrator, Jeff Hays is, in my opinion, one of the finest up and coming voice actors in the market. His ability to portray many different voices, and talent to convey emotion with his words, make listening an adventure. The only criticism I have is I wish the book was about 2-3 hours longer. That said, this is a story that can be listened to multiple times. I'm on my third listen as we speak.

Their journey is tampered with assassins to stop them. As to which quest, listeners/readers are going to want to know.

Toward the end of this book, things don't go as plan. It also leaves a lot of questions of whether Oric and Wolf cross over to Polynya before or after. I won't give the ending away but it is enough for listeners/readers in wanting more.

Both narrators, Jeff Hays and Annie Ellicott gave an excellent performance. I can't wait to hear them both in the next book.

I was given this audiobook by the author. I have volunteer to write an unbiased review of this book. I was not compensated or influenced in any way in writing this review.


A great addition to the series. The whole crew is back and along with them we meet an NVA Seed and the giant Lothar. They continue their journey to stop the source code bomb, but not without completing their quest to take out the Drachma Killers first. The story ends at a major climax, leaving you wanting to start on the final story right away to find out how Oric will deal with the fallout from The Drachma Killers.

Jeff Hays does a great job once again with his narration, distinctly voicing characters and accentuating the game world with INSTAKILL and CRITICAL HIT sounds.

why do you do this?

What an ending. Can't wait for the next one. Hopefully the wait isn't too long!

The book definitely ends on a cliffhanger, but felt it was a great short story. The progress moves along well and never felt slow or boring. The descriptive dialogue helps you visualize it and Jeff Hays narration brings it to life very well. Once again great narration and great story.