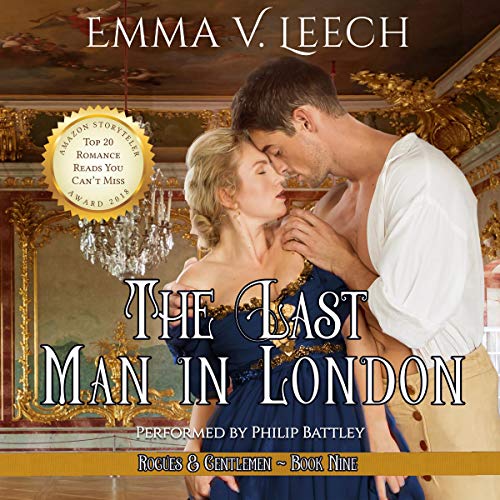 The Last Man in London

The Last Man in London

Dinah Osborne needs a husband and she needs one now.

Not just any man will do. To meet the terms of her rather eccentric grandfather’s will, she must be safely engaged to marry a man of worth before her 21st birthday or she’ll not receive a penny of her rather large inheritance. Sadly her social climbing grandfather’s notions of worth and her own are not in the least alike, and nothing but a Lord will satisfy the terms of his will. But Dinah is alone in the world and has no entry into the select ranks of the ton.

She does, however, know a thing or two about blackmail.

Lord Benjamin Lancaster is a determined rake, a hardened gambler, and the kind of man who fills Dinah with disgust. However a title is a title, and she’s quite content to use him for her own ends.

Yet her fake fiancé is not quite as easy to handle as Dinah had hoped, and he’s determined to have more for his trouble than the financial reward promised him. Dinah is not immune to his deep blue eyes or his dark charm, but it doesn’t change the fact that he’s the last man in London that she would ever give her heart to....