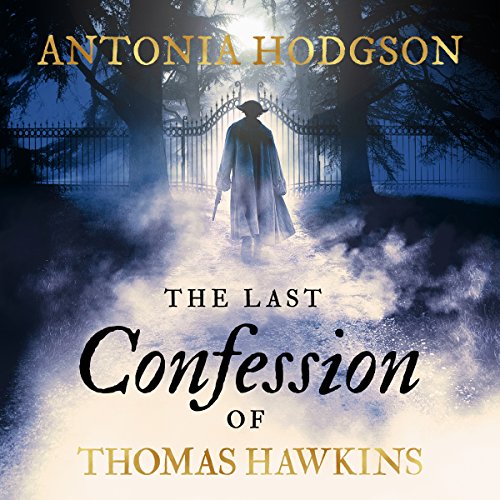 The Last Confession of Thomas Hawkins

By: Antonia Hodgson
Narrated by: Joseph Kloska
Try for £0.00

A brilliant historical crime novel of Georgian London from the author of The Devil in the Marshalsea.

Spring 1728. A young, well-dressed man is dragged through the streets of London to the gallows at Tyburn. The crowds jeer and curse as he passes, calling him a murderer. He tries to remain calm. His name is Tom Hawkins, and he is innocent.

Somehow he has to prove it before the rope squeezes the life out of him.

It is, of course, all his own fault. He was happy with Kitty Sparks. Life was good. He should never have told the most dangerous criminal in London that he was 'bored and looking for adventure'. He should never have offered to help Henrietta Howard, the king's mistress, in her desperate struggles with a brutal husband. And most of all, he should never have trusted the witty, calculating Queen Caroline. She has promised him a royal pardon if he holds his tongue, but then again there is nothing more silent than a hanged man.

Based loosely on actual events, Antonia Hodgson's new novel is both a sequel to The Devil in the Marshalsea and a standalone historical mystery. From the gilded cage of the Court to the wicked freedoms of the slums, it reveals a world both seductive and deadly. And it continues the rake's progress of Tom Hawkins - assuming he can find a way to survive the noose....

What listeners say about The Last Confession of Thomas Hawkins

This audiobook really is in a class of its own. Narrated superbly by Klloska, this story flits between present and past with a thrilling storyline, that sees Tom Hawkins' explain how he got to be sat in a carriage destined for the hangman's noose.

Each time it came to me turning my iPad off I found myself really not wanting to! I could have listened to this book forever, it had everything; great characters, superb narration, fantastic storyline .. The lot. I would recommend this to anyone and everyone, of all ages.

This audiobook will captivate you and leave you desperate for more. Highly recommended.

Loved the new adventures of the lovable rogue Hawkins and the spirited Kitty. Great new characters including Queen Charlotte and a female gladiator. The writing is so evocative of the time period and is a great historical romp around London in the 1720's. I like the atmospheric musical interludes and the narrator was superb. Once again though, as in The Devil in the Marshallsea, the editing was poor. Repetitions in narration and dialogue overlaid. I would be disappointed if I were the author or indeed the narrator.

What did you like most about The Last Confession of Thomas Hawkins?

What other book might you compare The Last Confession of Thomas Hawkins to, and why?

The Devil in Marshalsea as it's a follow up.

Firmly set in 1720s London, very strong on location and historical detail. Loved the physical sense created by the author; the characters have a real feel and the smells and sights are almost tangible.

Good story line and likeable characters I read the authors comments that she used the speech patterns she thought/believed would have been used at the time..... so given fair warning.....(some bad language) but apart from that enjoyed the book.

This book like others I have read about Thomas Hawkins.was a jolly good yarn and most enjoyable to listen to.I would give this a five star rating.

Sequel even better than the first!

I enjoyed 'The Devil in the Marshalsea', but this sequel is even better. The narration is excellent - with just enough characterisation to carry things along without being intrusive. The plotting is focussed and the story keeps you guessing. I thoroughly recommend it.

I have fallen in love with these books. I love the relationship between Tom and Kitty. The narration is fantastic and gives the characters life. Fun, Sad and uplifting all at once. Thank you, please keep writing them.

LOVED this!
it's so immersive i sometimes forgot it was a modern tale.
Fabulous reader too in Joseph Kloska!
brilliant all round!

Great story with a few twists along the way and some very funny parts; the narration is excellent.

almost as good as the first

The second part is almost as enjoyable as the first, I love the narration and style. It's just not as surprising as the first part, given that the story is quite similar to the first one.