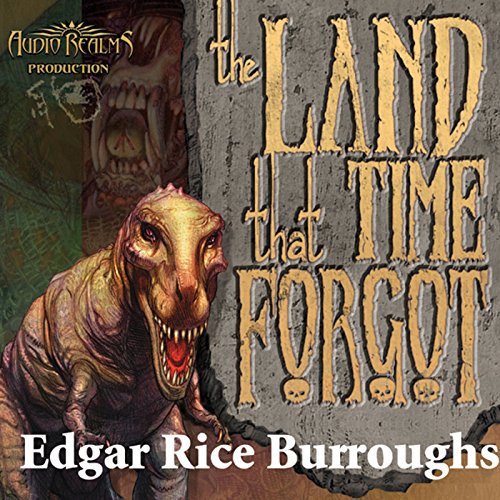 Here is book one in Edgar Rice Burroughs’ classic Caspak trilogy, which also includes The People That Time Forgot and Out of Time's Abyss. The crew of a lost submarine encounter an island filled with prehistoric flora and fauna. It's a classic ripping yarn and fast-paced adventure story and one of Edgar Rice Burroughs’ most enduringly popular tales.

Although I was initially reluctant to consider the Caspak trilogy as a legitimate part of the canon of Lost World adventure-romances, this reading has allayed my doubts. One cannot help but roll one’s eyes at the inevitable “he-man” moments of the text, but the reader does not make them any more pulpily cringey than they already are. In fact, I enjoyed this work much more than the original Tarzan both in terms of both storyline and pace. Perhaps it also bears mentioning that this reader’s recording is far and away the best of the many options available at the time of writing.

Would you try another book from Edgar Rice Burroughs and/or Brian Holsopple?

Yes to both. Burroughs, when he is at his peak wrote great adventure yarns. Holsopple's performance matched well with the material.

It seemed somewhat rushed. Perhaps it was always the authors intention to end things that way, but the last bit seemed like it was added at the last second to provide a better ending.

What does Brian Holsopple bring to the story that you wouldn’t experience if you just read the book?

The performance does add a sense of urgency to the critical parts. As I stated earlier, he matches well with the material.

There was, and I did.

This is the start of ERB's Caspak trilogy (along with THE PEOPLE THAT TIME FORGOT and OUT OF TIME'S ABYSS). Personally, I found his Pellucidar series - which covered a lot of the same beats - to be better written. Recommended for Burroughs fans, but only as long as they know that this is not the authors best work.

Decent book and story not something that I would write home about. rather entertaining nothing to complain about. If you're looking for something rather short and kinda sappy. Then this might be a good book for you.

Would you consider the audio edition of The Land That Time Forgot to be better than the print version?

I'm glad a came across this, it was a quick fun listen, plenty of action, kinda of a cross between Indiana Jones and Jurassic Park with people from the turn of the 20th century,
Im looking forward completing the series.