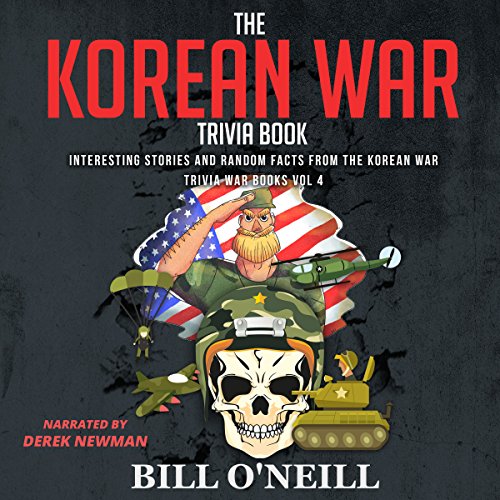 It was on your screen when you watched the 2018 Olympics, and it’s in the background every time Donald Trump sends out a tweet about Kim Jong-un. It’s the Korean War.

The Korean War has everything: rebel uprisings, a totalitarian regime, mad dictators, and mysterious, lying media. It might sound like it’s right out of a dystopian sci-fi novel, but it really happened, and is still happening today.

With this audiobook, you’ll finally learn the ins and outs of the Korean War. You’ll learn the key players and the big events. Who was Kim Il-sung, and what is the demilitarized zone? But you’ll also learn some facts that get left out of the history books. So buy this audiobook and get ready to find out:

What listeners say about The Korean War Trivia Book: Interesting Stories and Random Facts from the Korean War

This was a really good trivia book, a good addition to O’Niell’s series.

Past Trivia much more relevant in our World

This Author is very dominant in this space and all aspects of Korea have become much more important for all of us to know.

History has a habit of rearing its head in the most unexpected ways, that is even more true in Korea.


So not only is this another interesting Trivia Book from the Author but the various tidbits we can absorb from this well done Book can help us understand the present situation in this area of the World.

A Three Dimensional View of Korea

Even though my father fought in the Korean War, I really didn't know much about the Korean War beyond what I saw on the TV program M.A.S.H., when I was a kid. After listening to this audiobook, I feel like I've gained a pretty good understanding of Korean history from the late 1800s to the present, and why North Korea conducts itself the way it does.

I liked how the author organized this book on the Korean War: early history, Japanese domination and exploitation in the early 1900s, WW II, Korean War, Post-War (i.e. the end of "active" fighting) and Present Day. The author provides greater detail on the war by giving the perspective of each of the war's "key" players: North Korea, South Korea, Communist China, the Soviets and the United States. By hearing each perspective, we gain a very balanced and complete understanding of how North and South Korea got to where they are today.

At the end of each chapter, the author shares an assortment of interesting factoids on Korea, most of which are related to the chapter's theme. I really enjoyed those tidbits! Some of my favorites:

*North Korea doesn't follow the Gregorian calendar, which sets "Year Zero" to Christ's birth. In North Korea, "Year Zero" is set to the birth year of North Korea's first ruler, Kim Il-sung (i.e. 1912). So, 2018 in the West is Year 106 in North Korea!

At the end of each chapter, the author gives listeners a quiz of exactly five questions. Instead of reading all five questions together in one long series-and then telling us all of the correct answers at the end- I think it would have been better if the author were to ask a SINGLE question, then give the choices, and then tell us the correct answer to that question before moving on to a new question. Because, on the audio version, it's difficult to keep track of the possible answers to five different questions before learning their correct answers. This is a very minor concern, though, and I am only offering it for the author's benefit.

The narration of this audiobook was excellent: the narrator spoke with a clear voice, enunciated well, and he had a pleasant-sounding voice.

Love these books! I always learn so much and it's super entertaining. I admit, I did not know a lot about the Korean War, and this really gave me a lot of good info. It's a nutshell version of everything you need or want to know about the Korean War... I really enjoyed listening to it, and I just won't be happy until I've read/listened to each of Bill O'Neill's books! Can't go wrong with this one.
I was given this free review copy audiobook at my request and have voluntarily left this review.

I enjoyed listening to this book about the Korean War. I remember learning about all sorts of other wars but only hearing a quick mention of this one. So if you want to know about the Korean War without having to go to the library or search online then this is the book for you. Bill O'Neill once again gives us a trivia book well worth listening to. He does all the work and then breaks it down into interesting little stories or tidbits for us to absorb. The narration is well done and at a good pace. The only other thing I can say is that I hope Mr. O'Neill keeps the books coming!! They are GREAT!!

Exactly what it says on the tin

I've read a few of Bill O'Neill's histories now, and each one continues to live up to this former history major's expectations. You learn about the build up, the actual conflict, and O'Neill manages to even include the unification of the Koreas for the 2018 Winter Olympics.

This is the fifth book I’ve read/listened to by this author. He does not disappoint. This book is also full of insightful information. I like how he brings up facts I am unaware of, and that make me think about the content from a different angle.

This is the fourth book I’ve listened to by this narrator (Derek Newman) and I would listen to another. All previous books were also by Bill O”Neil. He does very well reading this content. His narration is slower, but he speaks clearly enough I was able to increase listening speed to 1.5 without any issues.

As much about post-war as it is the war

Despite being called 'The Korean War Trivia Book' this book is much more about post war Korea as it is about the actual war. I guess you could give it a pass on that considering the war never officially ended (at least by the publishing date of this book).

The book tells the events of the war and how the nation split, and how they have diverged since then. The book is effectively split in two, telling the story of North Korea, and then the story of South Korea, as two separate pieces, rather than an entwined story. Considering how isolated from one another they are this is a good way to go about it.

The book is useful to understanding Korea, especially as it is prominently on the world stage again right now. With the book referencing right up to early 2018 and President Trump and 'the rocket man' comments, this book has left itself to feel slightly dated quickly. Since the early 2018 events the two Korean leaders have met (for the first time in decades) and made some steps towards a final peace between the nations. Maybe.

Narration by Derek Newman is good. Well paced and easily followed, he is fine to listen to. No issues with him narration.

The Korean War Trivia Book: Interesting Stories and Random Facts from the Korean War - This book is exactly what it says it is. Packed full of trivia and quite in depth regarding the politics of the combatant nations.
I've read a number of Bill O'Neill's books and this one is the best. A subtle blend of entertainment & education.
I was given this free review copy audiobook at my request and have voluntarily left this review.

I love Bill O'Neill's War Trivia audiobooks! They are packed with facts - some horrifying, some unbelievable, some humorous – and many generally unknown. I am impressed by the research that must go into producing a book/audiobook that is factual, intriguing and, on occasion, laugh out loud funny. Often I found myself just shaking my head in disbelief at the mistakes made by both sides in the conflict or shuddering at the atrocities perpetrated or sanctioned by our own government. Very entertaining and educational look at a conflict that was virtually ignored when I was in school, and that has such a profound impact on the world today. I must admit, some revelations made me ashamed of the actions of the American government and military during the war. I am always eager to listen to these audiobooks, because I know I will be fascinated by all the new things I learn.

I love Mr. Newman's narration. His delivery is even, smooth, and well-paced.

Cliff Notes of the Korean War

I dont view this as much of a Trivia Book as its the abridged history of Korea from around 1900 on. Yes there are trivia questions/answers at the end of every chapter. But, I feel like thats just a check to see if you where really paying attention.

In the end, I learned quite a bit of the 'why' Korea is the way it is. And found especially interesting the WWII era, and the US/USSR influence post WWII. Short and to the point, this book will help any be more knowledgeable about why things are the way they are.