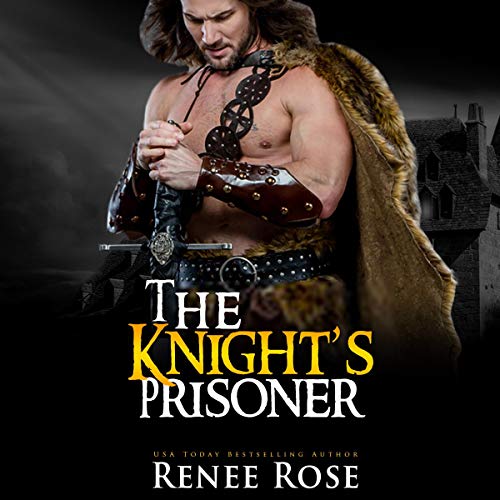 Danewyn is nothing more than a tavern wench, or so she pretends. She hides her ability to see into the unknown for fear she'll be condemned by the village priests. But when she makes a prediction about the Red Fox--the lost prince and rightful heir to Britain's throne--she's overheard by one of his knights, putting her in grave danger as a suspected spy.

Captured and carried off for questioning, she's held prisoner at the Red Fox's camp, under the guard of Sir Ferrum, an enormous and badly scarred knight. Sir Ferrum does not hesitate to punish her attempts to flee, but he also reveals a gentleness difficult to reconcile with the harsh discipline. As her feelings for him grow, Dani must decide whether to continue her plans for escape or accept her new role as Sir Ferrum's lady and Seer to the Red Fox.

This story will keep you on the edge of your seat during that next car trip; there was no chance that I was going to doze off while this story was playing. Renee Rose has included an intriguing plot with stimulating characters in this story. While the development of the plot was a bit slow in coming, there were many exciting, unexpected experiences along the way – you won’t get bored.

The reader, Katherine Littrell, performed excellently as she brought the emotion of the characters to life.

Note that this encounter with domestic discipline and spanking is rather firm at times and may make those new to the genre squirm a bit.

I love stories set in the medieval time period. This one did not disappoint. I also love a good heroine who knows her mind and fights for herself and those she loves. All aspects of the story were very well developed and captivated me. Lots of delicious spankings and HOT sex scenes! Yum, Yum, Yum!

Narrator did a good job I thought. Her male voices were masculine enough. I'm not an expert on British accents, but it sounded okay to me.

I'm very conflicted on this one. It's very far out of my usual comfort zone. However, there were elements I liked. And, for erotica, it had a pretty good back story. Actually it's rare that there actually IS a back story.

The heroine being an actual prostitute thing was different for me. When I read the audible blurb, I assumed she was a "tavern wench" in the sense that she worked in the tavern but refused to service customers and was actually somehow miraculously still a virgin. I've seen that one done before, multiple times... seriously.

But, nope, she was the real thing. A prostitute who willingly serviced multiple men a night and by all accounts made the best of it. There were things said that made you believe she probably had little choice in her lifestyle, but she didn't come off as a victim, which I kind of appreciated actually. She was a survivor and did what she had to do. To her, sex was a job and not something she had an emotional connection to (until the hero). However, her ideas about sex and fidelity caused problems between her and the H.

This was Arthurian England. Arthur was dead and his lost son was trying to take the throne. It had the feel of a medieval. London was mentioned a lot. I'm not even sure there was a London back then?? I'm not an expert on that time period, but I guarantee you there were zillions of liberties taken.

I generally give erotica a pass on historical accuracy.

However, since Rose wasn't all into authenticity, why couldn't she have given a nod to cleanliness? Even if it wasn't a big thing at that time. There are several scenes where I'm thinking 'my God, please take a bath first!'. Of course, people have various kinks when it comes to erotica and this may be one. I'm not judging. As long as you leave kids and animals out of it, have fun. Doesn't mean I enjoy it, but I'm not here to censure anyone else's enjoyment. Keeping that in mind, here's just one example of the "ick factor" for me. Make your own judgement.

The night the hero abducts the heroine she voluntarily gives him oral sex. He's thinking while she's doing it that even though he had a whore a couple of hours before she made him feel incredibly horny (paraphrase). Ummm... I'm pretty sure there was no washing off of his privates between the "whore" and the oral several hours later. Who knows when the woman he was with last bathed or how many other men she'd been with that night? Or when was the last time he or the heroine last bathed? I don't think I'm a germ freak, but I honestly had a bad smell in my nose the entire time :(

I tried to pretend they had a shower out back that was conveniently never mentioned ;)

This was a great listen. I haven't read the book yet but plan to since I will now be able to "hear" it as I read. The narrator did a wonderful job and brought the story to life.

Aw! The number of spankings makes me sore!

Captured by the rebel soldiers, after making a prophecy about Red Fox, the rightful descendent for the crown, Danewyn feared for her life.
The giant of a soldier, with the scarred face was a fierce warrior, and yet saw to her every need. After meeting with the Red Fox, she found, for once, her gift of prophecy was respected and she had just become the Foxes Seer. However, in the same meeting, she found that the Prince would not tolerate lies and she had earned herself her first spanking . from the fierce knight, Sir Ferrum.
Each time she erred, she earned a spanking, yet the emotional ties both she and Lord Ferrum began to feel could not be denied.
I won't spoil the story for you, but it is difficult to understand why someone administrating a spanking in such a time frame could not leave a very sore area, that would not be comfortable for days.
Loved the audio rendition and believe that it enhanced the experience of this story.