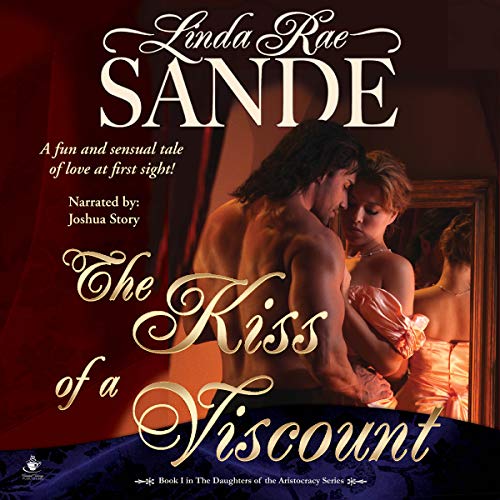 The Kiss of a Viscount

By: Linda Rae Sande
Narrated by: Joshua Story
Try for £0.00

Having just inherited his uncle's viscountcy, George Bennett-Jones is informed by his mistress that he must find a bride, preferably the daughter of an aristocrat. Through a series of lessons, she instructs George on the finer points of meeting and courting a woman of the ton - and she has one in mind for him.

It's love at first sight when George spies Lady Elizabeth Carlington dancing with the Earl of Trenton. But the auburn-haired beauty is quite sure the earl will offer for her hand, and she has every intention of accepting - even if his kiss has her feeling as if she were being kissed by her best friend's dog!

When Elizabeth mentions the unfortunate kiss during the ball's supper, George implies there is an art to kissing, innocently offering to replace her poor first impression with a proper kiss. Intrigued, and unaware that George is a viscount and a secret patron of her charity, Elizabeth accepts his offer at the next ball. George is more than happy to accommodate her. His kiss has the daughter of a marquess so stunned, so amazed and so aroused, she requests that he demonstrate the pleasures that can be had in a marriage bed. Knowing he has only one night to court the woman who has captured his heart, George sets out to prove himself while promising he will leave her virtue intact.

Will the evening of pleasure he has planned for Elizabeth convince her to accept his hand in marriage? Or simply leave her with a vivid memory of what she will be missing should she accept the earl's marriage proposal? The lessons of a mistress prove invaluable in The Kiss of a Viscount.

What listeners say about The Kiss of a Viscount

The Regency setting is by the by. This slightly smutty and highly improbable story isn't worth getting past the second chapter.

This is a lively romp into the lives of the Aristocracy with just the right level of romancing and heat to make it very readable and most enjoyable.
The characters are well formed and I particularly liked the enquiring, inquisitive mind shown by Elizabeth and the patience of George.
I am quite happy to recommend this ebook and audiobook for its entertainment value!

The Kiss of a Viscount

I enjoyed listening to this book very much. The narrator was very
Good and the story itself was excellent. I was so happy that she
Fell in love with him and they married very quickly. Once i had gotten into it i wanted it to go on and on. Well done Miss Sande. Look forward to hearing your next book.

What did you love best about The Kiss of a Viscount?

Everything, basically. First and foremost tho has to be the author's writing for without a great writer you don't get a great story. The characters were very likable and made you want to know more of their story, the plots and sub plots.

Besides everything I have mentioned in the review, I liked the more in dept overview of mistresses of the time. Very fascinating.

Have you listened to any of Joshua Story’s other performances before? How does this one compare?

No, not that I remember but would love to read other stories narrated by him.

Yes, very definitely but had to listen to it in two sitting for it was fairly long. The time did fly by however.

I am a new lover of Regency romances, never been able to read them but

very much love to listen to them. I thoroughly enjoyed this book. It had everything one

wishes to encounter in a book, mystery, romance, and humor, just to mention a few. The

characters were developed very well. The synopsis had me thinking this would mainly be

Elizabeth, had an equally well written story line. The Regency era had many

and their mistresses. This story showed how a man of the ton had actually loved and

respected his mistress and became friends with her. Gave me a new respect for

mistresses back then. Some were fully taken care of and considered their affair as

employment. So different than today. I highly recommend this audio book, for the writing,

the story line and an excellent narrator.

This was a very good listen. The story premise was a bit unbelievable but the excellent sex scenes and HEA made up for that. The narration was ok, his voice was nice to listen to but there were several points where he paused at the wrong time, throwing off the rhythm of the sentences a bit. I did enjoy the book and look forward to listening to more from this author.

"This audio book was provided by the author, narrator, or publisher at no cost in exchange for an unbiased review courtesy of AudiobookBlast dot com."

The author's style in not up to par, the reader is young and lacks masculinity.

I enjoy regency romances with a twist. This book was very enjoyable and well performed. The premise for this story was original and most of the characters likable. I also enjoyed the humor in the book. My review is not a synopsis of the book, but rather my opinion of it. Both the author and narrator were new to me. A few things were repeated overly much (Elizabeth making an O with her mouth and mention of her aquamarine eyes) in my opinion. I most definitely will look for more books by this author and narrator in the future. I was provided with this audiobook at no cost and have voluntarily written this review. I thought the narrator Joshua Story did a great job with the various characters and changed his voice for them. My favorite character in the book was Josephine. She was so smart and insightful and compassionate.

This book is very slow. I really did not enjoy this book.

The book was written around a few characters. It should have had more
story. A bit more romance. I really had problems getting into the story and
where it was going.

Not really into the narrator. But he was reading what was written.

A real story. I am not sure what would improve this one. I would not call
this a romance.

I have over 300 books and this one was not one that I would listen to over again.

on a reread it made more sense. as an audible it is not so easy to page back for reference.

Quite intriguing and delightfully sensual, without being disgustingly obvious. I recommend it for reading repeatedly.

Great books...this one got me to get them all...the audios and ebooks... Sande is Super!

Sensual feast in a sweet package.

The reason I started my historical romance journey was because I fell for a wounded Lord and his orphaned charge in Judith McNaught's "Once and Always". Linda Rae Sande takes me back to that precious time. The Kiss of a Viscount speaks to the heart on every level. The beginning of a challenge becomes the culmination of something wonderful. I was head over heels for the story from first read and now that I've had the chance to hear this love ballad as an audio read, I am more in love than ever. If simple is sexy, than The Kiss of a Viscount is smokin' hot. A sensual feast in a sweet package.

I loved the story. I like the narrators performance of this book. I did find it confusing at the beginning with the 2 different men but soon figured it out.