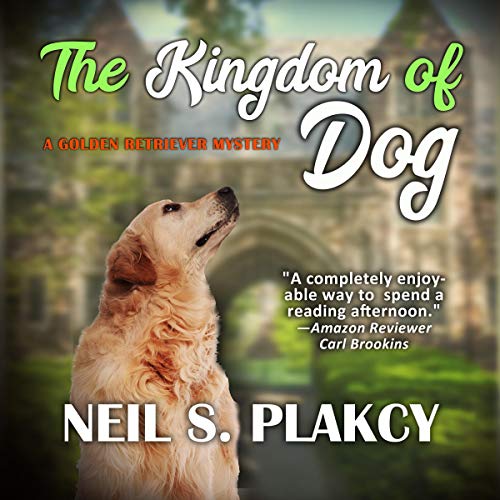 The Kingdom of Dog

The Kingdom of Dog

When his mentor, Joe Dagorian, director of admissions at prestigious Eastern College, is murdered during a fund-raising event, Steve Levitan feels obliged to investigate. He and his golden retriever, Rochester, go nose to the ground to dig up clues, including a bloody knife and some curious photographs. But will Steve's curiosity and Rochester's savvy save them when the killer comes calling?

Second in Neil S. Plakcy's Golden Retriever Mysteries, The Kingdom of Dog is funny and charming - and who can resist a gregarious golden character like Rochester?

What listeners say about The Kingdom of Dog

This is a great follow up to the first book. It's well written and has a fast pace. I enjoyed it immensely. I will listen to the next book.

Steve and Rochester are back with another mystery geared for the dog lover in all of us. In this sequel, Steve is working in the PR department at Eastern College. When his mentor is murdered at a fundraiser, Steve is pulled into the case once Rochester starts nosing out clues.

This is the second in a series of seven books starring the duo, but it can be read as a standalone. It's a clean read with no cliffhanger. Like the first book, the author writes in a simple and straightforward manner with plenty of day to day details. Because of this, we know everything about Steve from what he wears every day and eats at every meal, to every facet of his job. While I missed the hacking that Steve did in the last novel, and I wish it had been included in this one, I thought the inner workings of the college were interesting. I had fun guessing the mystery behind the murder. It was a nice easy listen and a great way to spend a few hours.

The narrator is a perfect match for Steve, he sounds just like I'd imagine him. His voice is pleasant and immersed me in the book. I received a copy of the audiobook at my request, and have voluntarily left this review.

I had started with the books towards the end of the series and tried to come back to the beginning.
Clearly, the author has grown and developed professionally. These characters are likable but not very fleshed out. A few things came out of left field, and then the author tried to explain it, which ended up dragging the story (i.e. The trip to the Big Apple.)
There was a bit too much explained about Steve's job and how he performed it. I thought it would bear evidence or assist with the mystery, but it did not.
I would still recommend this book and series as a fun and cozy mystery. It's light and innocent.
I'm looking forward to the rest of the series.

I admittedly chose to start Plakcy's "Dog" series as relief from the heavier book(s) I listen to concurrently. However, I don't equate "light" with poorly written. The pacing in this second book was awful. The majority of the book could be entitled "More Than You Ever Wanted To Know About How Academic Institutions Secure Large Donations". The actual mysteries (2 murders and an illegal steroid ring on campus) are quickly resolved in the last chapter, as if the author just ran out steam and wanted to wrap it up quickly. He also commits a mystery writer's cardinal sin of having the murders committed by a character that isn't even part of the story until the climax! Bad form, Mr Plakcy– very bad form.

A lesser criticism I have - more of an annoyance, really – is the author's use of awful puns for his lesser characters. José Canusi? Lu Cigusi? Juan Tanimera? (Actual spellings unknown from audiobk…) Seriously?? Some listeners may find this quirk clever, but I find it immature and annoying as hell - all the more because this sort of limp wordplay is most amenable to the creation of Hispanic or other ethnic-sounding names.

Being the forgiving soul I am, and knowing that first-time series authors sometimes need to settle into the characters and world they've created, I'll probably spring for Book 3. But if I find that he fails to introduce the true "bad guy" character until the climax ever again, he will have proven himself to be a dishonest mystery writer, unworthy of my time OR yours!

Rochester the golden retriever helps solve another murder mystery in Bucks County, PA. His owner, Steve, meets a professor who just might be the girlfriend he has been yearning for.

Barking up the wrong tree

Very simplistic writing. A guy who repeatedly refers to himself as smart should display it once in awhile. I find it hard to believe the author is a dog owner. The dog is fed a steady diet of crappy people food. Much of it at the table. The police would never interact with a witness to a crime let alone a civilian as written here. Take a pass.