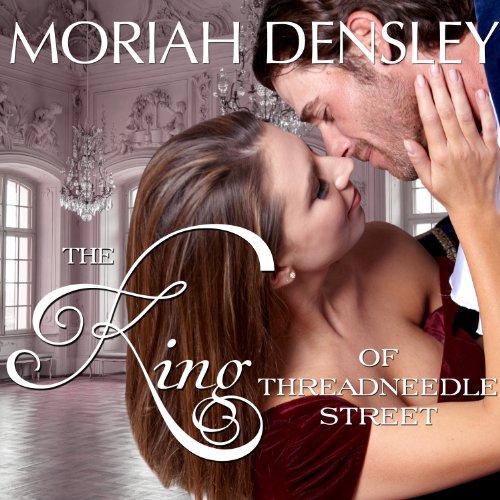 The King of Threadneedle Street

The King of Threadneedle Street

He owns three shipping companies, a diamond mine, and his own castle. He knows Portuguese, Hindi, Mandarin, and Morse code. His assets net thirteen million.

Everyone thinks Andrew Tilmore, Lord Preston, the financial prodigy dubbed "The King of Threadneedle Street," has it all, but he wants the one prize money can't buy: His childhood sweetheart.

Alysia Villier can't say if it's worse having Andrew's father in control of her inheritance or Andrew in control of her heart. He's ruined her for any other man, but she simply can't give in to him. She knows he's destined for great things - marrying a courtesan's daughter would jeopardize everything he stands for.

Keeping Alysia out of trouble and away from eager suitors becomes a cross-continental quest for Andrew, and he won't be stopped by his old-fashioned family or the disapproval of the ton. After all, he's a man with the power to play newspapers and investors like pawns, tumble world markets and incite riots...but can he win the biggest gamble of his life?

"The King of Threadneedle Street is one of the best historical novels I've read this year. Moriah Densley raised my expectations of the genre. I can't wait to read more!" (Rachel Van Dyke, New York Times best-selling author)

What listeners say about The King of Threadneedle Street

What made the experience of listening to The King of Threadneedle Street the most enjoyable?

It had a beginning and ending. No cliffhanger

Alysia drove me crazy at times. But, at the end it all worked out.

I loved Andrew's grandmother, she was great, no can mess with her. No-scene type of women.

Heather did an amazing job!

The entire book was entertaining.

Some of this was interesting just because it tied into the first story, but overall was kind of lame. Most of the characters were OK, but the story got old fast. There was not a lot to hold my interest and I found my mind wandering. I kept with it because I was interested in the fates of the various characters, many from the first book, but I would not recommend this book.
I gave it a 2 overall because I didn't want to knock the narrator. She was fine.

Lovely romance with lovable characters! This is the first romance I read that the heroine has independant spirit and not immediately fallen into handsome and wealthy hero. This is my first with the author and I'm glad that I decided to spend my credit on this. I love the narrator as well, so perfect with the french accent.

Let this king grab your ears

This was a great listen . Lots and lots of layers. It had you routing for the hero and heroine. I was totally routing for the hero. Even thought the hero was a heir to a marquee he didn’t want anyone just anyone. He wanted the heroine, who was a daughter of a courtesan. Which back then was underheard off

long and a tad drawn out

this was a good story although I think it could have been done in an hour or less. Good story and characters again I just think it was dragged out a little more than it needed to

From childhood friends to forbidden lovers this charming story starts in 1870 and tells of the undying love the gifted, affable, talented, wealthy and handsome Lord Preston (Andrew Tilmore) has for his soul mate and friend the Courtesan's beautiful illegitimate daughter Alysia who's a talented artist and sadly, his Father's Ward. But the class system of the times, together with his family's dislikes, makes her totally unsuitable to become his wife and although she has resigned herself to her lowly station in life he has not and moves heaven and earth, goes to hell and back, to change it and to get what his heart wants most.... Alysia.

A sweeping tale that spans three years as drama, secrets, angst, turmoil and fate make these two loveable characters, who have yearned for each other for so long, wait until just the right time before they can finally be together. But before that there's many nail-biting hurdles to overcome including Alysia's endless doubts, however Andrew is determined, willing and able to change their destinies if she can only hold on to her faith in him as it may take Andrew years but she's HIS, HIS, HIS.

Worth a credit? A captivating, enjoyable and emotional love story about two strong and loveable characters with witty intense dialogue, a sensual romance, a clever talented author who throws in the unexpected and weaves it around a beautiful romantic journey and we get to meet Wilhelm and Sophia from book 1 (my personal favorite). What more can you ask for.... and YES very creditworthy. Could easily be a stand-alone listen.

Loved both of these books...

Loved these two books... beautifully written and developed. The narration was excellent. Can't wait for another...please!!