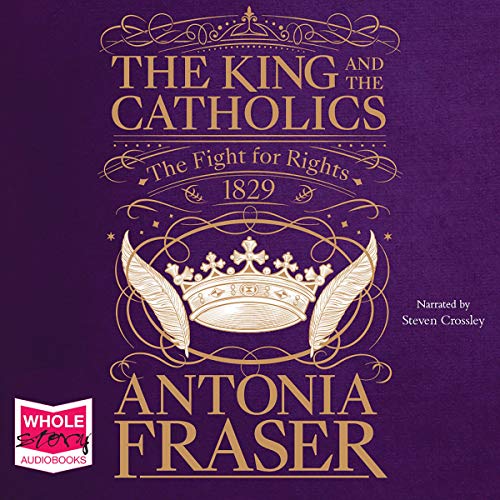 The King and the Catholics

By: Antonia Fraser
Narrated by: Steven Crossley
Try for £0.00

The story of Catholic Emancipation begins with the Anti-Catholic Gordon Riots in 1780, fuelled by a reduction in Penal Laws against Catholics harking back to the 16th century. Fifty years later, the passing of the Emancipation Bill was hailed as a 'bloodless revolution'.

Yet, had the Irish Catholics been a 'millstone', or were they the prime movers?

Antonia Fraser brings colour and humour to this vivid drama with its huge cast of characters, including George III, the Prince of Wales, Lady Conyngham, Lord Wellington, Sir Robert Peel, 'roaring' Lord Winchilsea and the heroic Daniel O'Connell. Expertly written and deftly argued, The King and Catholics stands as a distant mirror of our times, reflecting the political issues arising from religious intolerance.

What listeners say about The King and the Catholics

I’ve always found Antonia Frazer’s writing style difficult to follow, but the subject matter is one of deep interest to me. I love early 19th Century British politics, I’m fascinated by the great personalities, the society and say of thinking. Times of great talents and statesmen. Even though this book is accessible popular history it is still a ‘specialist’ subject and anyone just diving in would find this difficult to follow. I enjoyed the read but would have found a longer book more of a slog, it didn’t unfortunately keep me gripped as some books do.

Great historical book. Will have to listen to it a few times to take in all the information it contains but would recommend it. Antonia Fraser never fails and the narrator was easy to listen to which really helps when there's so much information to listen to.