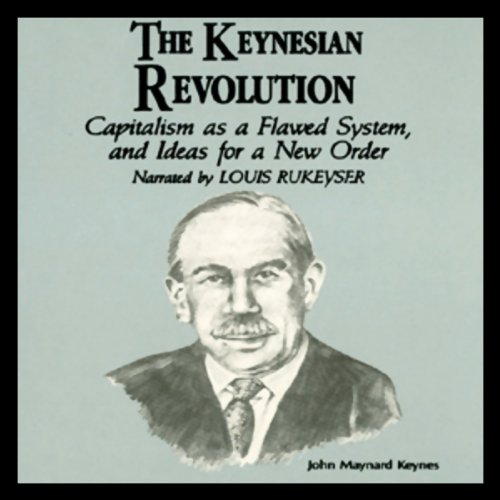 John Maynard Keynes (1883-1946) was without question the most influential economist of the twentieth century. His most important work, The General Theory of Employment, Interest, and Money, was published in 1936, and it was widely perceived as offering plausible explanations and solutions for the Great Depression.

Keynes suggested that capitalism is vulnerable to instability caused by insufficient consumer demand. He emphasized the reluctance of workers to accept reductions in nominal wages, preventing free market adjustments to unemployment. Based on these and other perceived defects in the capitalist system, Keynes suggested government intervention in the economy, and modern politicians have accepted and applied Keynesian ideas with great enthusiasm.

What listeners say about The Keynesian Revolution

not a great book

it was more of a biography of Keynes than a lesson of Keynesian theory. The book did little to improve my understanding of Keynesian economics.

A Concise Summary of Keynes

This is a good tight summary of Keynes's life, ideas, & work in economics. The voice acting takes me back to my early PBS documentary days. Overall enjoyable and informative given the time restrictions of two hours and change. Everyone should have, at the very least, an understanding of the man and ideas that massively influenced contemporary economics.

Keynes' ideas and detailed clearly following the course of his life in an excellent balance between economics and storytelling. One of the best written economics books I've found here

I have a had a growing interest in the Austrian school of economics in light of the current financial crisis. Keynes is the counterpoint to that school and provides the basis of much the current policies coming out of the Fed and the Treasury. I was interested in gaining a greater understanding in this different perspective.

The book is largely biographical. It provides a glimpse into the life of a man who is well acquainted with the bohemian literary circles of early 20th century Europe. The core of his ethic appears to be defying convention. His claim is that intellectual rigor trumps tradition. However, reason and logic appear to be a significant part of the tradition that he seeks to defy. I say that as an observation not a criticism. Keynes theories appear to be more interested in defying convention and promoting (British) political position in the world.

The book was hard to review in that it was well written and enjoyable. However, Keynes as a key part of illuminating our current crisis is a frightening proposition.

"Meltdown" by Thomas Woods Jr. provides an exceptional foil to the economic theories promoted in this (admittedly biographical) text.