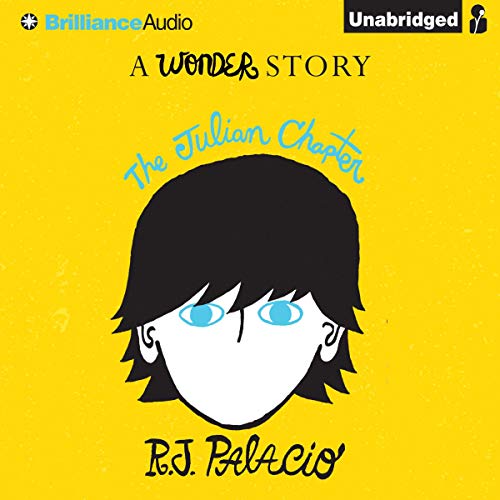 By: R. J. Palacio
Narrated by: Michael Chamberlain
Try for £0.00

Over one million people have read or listened to and loved Wonder. Now listeners will have a chance to hear from the one of the book's most controversial characters - Julian.

From the very first day Auggie and Julian met in the number-one New York Times best seller Wonder, it was clear they were never going to be friends, with Julian treating Auggie like he had the plague. And while Wonder told Auggie's story through six different viewpoints, Julian's perspective was never shared. Fans could only guess what he was thinking.

Until now. The Julian Chapter will finally reveal the bully's side of the story. Why is Julian so unkind to Auggie? And does he have a chance for redemption?

What listeners say about The Julian Chapter

narrator was good-ish! the story was good as well and overall I think it was good

I loved this story, maybe even more than the original. The lessons about humility, remorse, and the human tendency of being afraid and fighting back with anger, were all so important and powerful. For kids who have been bullies this book could be just as important as Wonder was for those who have been bullied. And really, many of us have been a little of both. I didn't realize when I downloaded this that it would be an entire book! What a treat! I also didn't expect ever to like Julian's mom, and yet I empathized her through this story. So, so good! If you liked Wonder, or even if you somehow didn't, read/listen to this one, too. You won't regret it.

I am thoroughly entranced with this writer's works and how she incorporates such great life lesson a fantastic story. Highly recommend to anyone.

I think these a nice book because it is an good and awesome book it is telling us there story and then we can understand what there are talking it also descriptive and at the end it awesome book and we can make mistake and try to correct it . It also teach us that lesson . I think it a nice book . It was fascinating. It has a sad and happy ending and it teach a little french.

To hear the story told in the perspective of a young child so utterly indifferent to another’s struggle leaves you in awe at first. Then to see how the writer masterfully writes the transformation of that child is inspiring. I listened with my own 10 year old and he smiled at the ending. Very well written, with a beautiful lesson.

The Julian Chapter is amazing, it goes deep into his heart and mine as well.

Good no great no awesome! The best book ever ! I love it so much!

Awesome! Best book ever!! I luv it!, very inspiring and detailed. I loved it so much.

All youth should read this story! We all need to remember Julian and the sacrifice he made! Wether the book is fiction or not, there were thousands of people like Julian and grand mere in the war. GREAT LIFE LESSON TO ALL!

What was one of the most memorable moments of The Julian Chapter?

Sounds like the way a KidMin that age group would talk

Great book to follow up wonder about finally accepting the differences of Augie and reaching out to him. Inspiring that he grew up and full of seeking forgiveness and forgiving others.