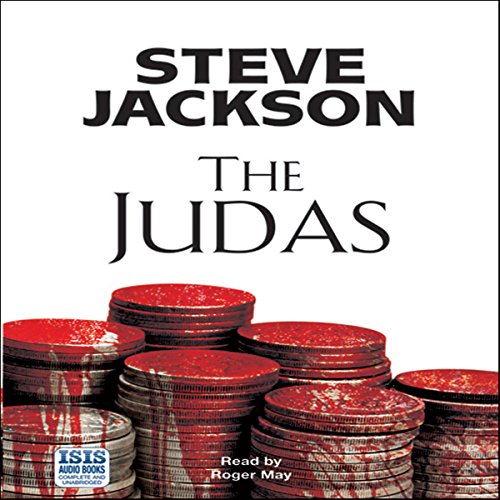 By: Steve Jackson
Narrated by: Roger May
Try for £0.00

In Rome, the severed hand of a retired MI6 head of station is found at one of the city's landmarks. The hand is grasping a bag containing 30 silver pieces.

Meanwhile, in London, MI6 agent Paul Aston is on the point of quitting. When he is approached to head up a new task force, he jumps at the chance. His first mission is to investigate the murder in Rome. When one of MI6's directors dies suddenly, Aston realises there is more going on than meets the eye.

As Aston digs deeper he uncovers a conspiracy that dates back to the dying days of the USSR. Someone has everything to lose if the truth gets out.

What listeners say about The Judas

Decent, but definitely a sequel

There's no question that in terms of listening time (10 hours), this delivers good value, which is important for those of us who listen to lots of audiobooks. The narration is pretty good, and the story moves along nicely.

However, I kept feeling like there were details missing - things I was supposed to know about the characters but didn't; an assumed depth to the main characters that certainly wasn't contained in the text itself; and to be honest I didn't quite figure out what the main villain of the piece was supposed to have done (to have been thrown in jail and treated like poison by the rest of the characters) until about hour 6.

Then I did some research and found out that this book was an unplanned sequel to a first book by Steve Jackson, called The Mentor. (There's supposed to be a third book in the series, but apparently it was to have been published in 2008 and it's Aug 2009 now and I don't think it's out yet.)

The story is good, but I think it would have been much better had I read the first one. And the ending isn't particularly satisfying, but I think that's because the REAL ending - the Big Scene - will come in the third book.

So if you've read the first book, by all means get this one. And if you sometimes choose audiobooks for length, you should also get this one, because it's perfectly serviceable. But otherwise, this isn't going to be the best book you've heard all year.