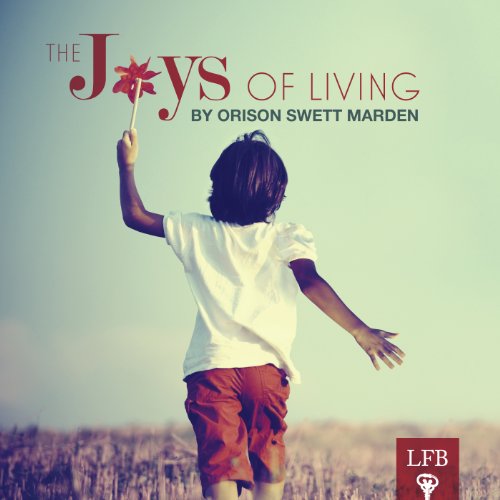 The Joys of Living

He was the biographer of the Gilded Age and founded Success magazine during a period when the US economy was freer than it had been any time before or after. Marden admired the great men and women of this period, and he became their preferred philosopher, inspiring the likes of Henry Ford, Thomas Edison, Harvey Firestone, and J.P. Morgan.

The Joys of Living is his instruction book for a rich, full, and free life. This 100th-anniversary edition shows that his prose has lost none of its original power - and it is even more relevant now that we are faced with more obstacles to success. His core point is to look beyond the obstacles and become hyper-aware of the opportunities. He shows how in chapters on mental outlook, debt and money, reading and family life, hope and despair, and young and old age.

The greatest discovery of the time, he writes, was not a technology but a philosophy. It was the philosophy that the individual human mind was the most productive resource on the planet, more powerful than all the natural resources or manmade machinery. It was the human mind that was the real source of progress and prosperity. Previous generations believed they were trapped by fate, by class, by social position, or by forces more powerful than they. This generation saw the truth that nothing could contain an idea whose time had come, so long as there were great men and women around who believed in it and acted on it.

What listeners say about The Joys of Living

Essential for any success library

Stephen Covey talks about the dichotomy of success literature: almost all contemporary work fits into what he calls the personality ethic: you succeed by how you dress, what you say, how you act. It is possible to "trick" your way to success. Covey notes that before this, all success and self help literature was classified as what he called the Character Ethic: to succeed, work on that which you are.

As clearly written as if Marden had penned these words yesterday, and 100% as applicable today. Not to mention his amazing writing style is an absolute joy to listen to! My "success library" consists of well over 400 books, Marden and Emerson are easily my favorites. You will NOT regret this purchase!

This is a Must Have!

Combined with an excellent narration, this audiobook is one of the few that I consider a gem. If you can realize the information presented and live it you are going to be one of the fortunate ones indeed!