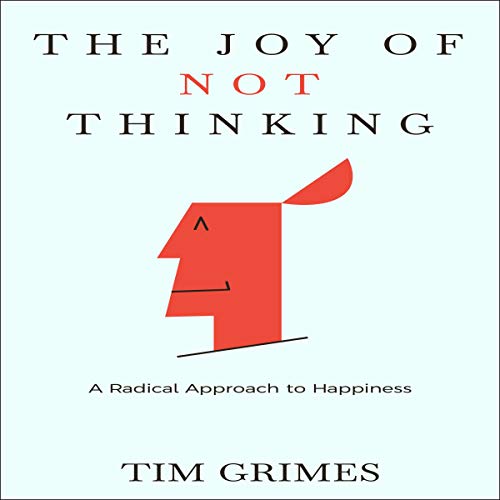 The Joy of Not Thinking

By: Tim Grimes
Narrated by: Mark Manning
Try for £0.00

Discover the joy of not thinking...

When I was 16, I had a mental breakdown. It happened while I was on vacation in the Caribbean with my family. I’d been reading an old Zen book, and it did me in. I’d experienced some strange mental states before, but this was different. As I read this book, death moved to the foreground of all my thoughts...and then stayed there.

I found myself in a tropical paradise, terrified. Living seemed too cruel to carry on with. Buddha had said all life was suffering and all that meant was that everything was hopeless. There was no way out. Escape was impossible. When you looked at things soberly, it was obvious. Life, inevitably, was really just suffering and death.

I kept this anxiety to myself as best I could. There was nothing to say anyway. No one could help. I was helpless, mortified, but aware that I was unable to do anything about it. The stress began to wear on my body. It felt worse and worse. I would have killed myself right there if death didn’t scare me even more than life. I reasoned if I killed myself at least this particular suffering would be over.

These feelings peaked and then went on, and on, and on. At some point, I took a drive with my family to a beach on the other side of the island. It was bad. My insides felt as if they were being torn out. I didn’t understand what was happening. I felt like vomiting but couldn’t. Finally, we arrived at the beach. I sat under a tree, in the shade, trying to act sane.

And then, I thought I died.

Something happened and then nothing. And then there was something again. I don’t know. Was I dead? I looked around and realized I wasn’t. I was on the beach, under a tree. But there was no “I”. Everything was different. Everything had dropped off. Where was “I”? I didn’t exist. What was happening? What was this? It was indescribable. You couldn’t describe this. Any description was pointless. Everything was perfect just as it was, but at the same time, it wasn’t that. Because, there was no everything. There was nothing at all. There was no need to describe anything ever again because there was nothing. Words and description were meaningless. Nothing was real. Nothing mattered!

And this was, undoubtedly, the best news possible. The greatest realization I could wish to have. Yet, that couldn’t begin to explain how good this was. It was way beyond any conception I could come up with. Everything, and everybody, was saved. That was clear. Everything was fine - now and forever. Nothing needed to be done, ever. The whole thing - life, death, reality, individuality, good, bad, right, wrong - was a lie. An illusion. A sham. Everything just was - just is.

And this was perfection beyond any belief, rationalization, or label I could ever put on it. It made no sense, and it was perfect. It was before time itself. It transcended thought and was past my comprehension. Thought created all this suffering, and thought itself was not real. Without thought, all was grace - always. It was all blissfully and blatantly simple, yet totally illogical. I sat on that beach, thunderstruck. It was laughable. Whatever you thought, it didn’t matter. Thought had nothing to do with anything real. Everything was always perfect, no matter what you thought.

What listeners say about The Joy of Not Thinking

Smallish book, but Tim has the most endearing and relaxing voice, he is very centred and funny, and takes himself lightly. Highly recommended listening, especially if you have anxiety challenges.
Thanks, Tim, for recording this 👏👍

What the @%&# is going on with this narrator? He is reading it like some over-the-top, exaggerated bad guy in a Saturday morning children's cartoon. So distracting. The material might be good but the narrator makes it impossible to listen to. Skip the audio version and get the text. Gee whiz. Never heard anything this annoying.

straight to the point

Tim did a great job of keeping it simple and repeating the main focus. DON'T THINK.

he explains it in a non-esoteric way. He also gives good examples but reminds us that we have our own way of getting to the state of peace and that there is no "right" or "one" way

An interesting, counterintuitive take on happiness

I enjoyed this short read and its counterintuitive approach to happiness. It’s both deeply spiritual and quite simple at the same time.

Despite its brevity, it provides good value in the sense that its teachings are radical enough to inspire change. I say “radical” in the societal sense — such teachings are easy to implement, just far different from what society preaches as the pathways to happiness.

I will do my best not to spoil the content for you, but it all boils down to the title: The Joy of Not Thinking. Thus, the book is an exploration of that concept and a portrayal of what happens when we think too much. And, as you probably guessed, doing so is not usually a good thing.

My only critique of the book is that at times it almost sounds like it’s preaching pure passivity in life. Yes, stillness and non-thinking are very important, but so is balance. In order to get that balance, we also need a little bit of striving and passion alongside said stillness.

Overall, however, it’s pretty solid. Give it a spin!

-Brian Sachetta
Author of “Get Out of Your Head: A Toolkit for Living with and Overcoming Anxiety”

Recommend this if you're feeling like you have to keep striving, pushing, and making a whole lot of effort to change your life—and not enjoying it. Can be summed up as: "stop being so serious." Serious, to the extent that you're constantly worrying about the future and not enjoying the present moment. When the present moment is the only moment we live in. I don't really know much about Zen, but it reminds me of what little I do know. Only in a friendlier, easier-to-read format. Much Love to you!

It's different & well written. I liked this one. This book isn't for serious people.

The Joy of Not Thinking

Excellent introduction to some of the principles that underlie meditation practices and Buddhist psychology.
T