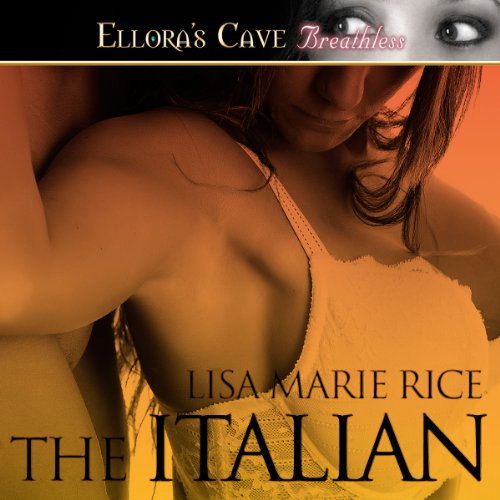 Lisa Marie Rice excels in writing scenes with white-hot sexual chemistry and physical passion that also engages the mind. In The Italian, heroine Jamie McIntyre discovers that Stefano Leone, her grandfather's former law student, is a foxy Italian judge who is on the verge of taking down a Sicilian Mafia boss. Though the two hotties must dance around each other at first, it doesn't take them long to get together and steam up the proverbial windows.

Audio actress Maxine Mitchell adeptly handles the abundant Italian accents and names, never distracting from the seductive story itself. The audiobook is short, but potent, and will probably leave listeners wanting more.

Stefano Leone is closing in on one of the most dangerous mobsters on earth. He's surrounded by armed men, his life under constant threat. He's not had time for sex in years, let alone love. A beautiful American woman, however, slips right under his guard, into his bed and his heart. But does she truly want Stefano? Or has she been sent to seduce him - or worse?

Designer Jamie McIntyre is on a working vacation in Palermo, Sicily, soaking up the sunshine and the art, trying to contact a former law student of her grandfather's. She's thinking "nerd in a suit." But Judge Stefano Leone is as far from a boring suit as possible. He's also the toughest, sexiest man she's ever met, in bed and out. There's no resisting his commanding presence or his beautiful body. Jaime quickly falls under his mesmerizing spell. Until Stefano's enemy strikes, dealing a devastatingly personal blow…and forcing Jaime to make an impossible choice.

What did you love best about The Italian?

What was one of the most memorable moments of The Italian?

The first sex scene in the Prince's restaurant was off the charts smokin'!

Would you be willing to try another one of Maxine Mitchell’s performances?

I wasn't a fan of the narrator's sing-songy style. It took some getting used to and I had to speed it up to "get through it." The cadence was so odd and dramatic even for just a regular sentence. Ugh, I didn't care for it, though her voice is pleasant.

Only thing I think that would have made it better, is for there to have been an epilogue. Have Jamie go to her grandfather see him well, come back to Italy to live, surprising Stephan at work again; make a nice circle. Maybe some joke about M. Bazanka not hating her anymore.

Though I like all her books, I've still never read anything of hers that comes close to the perfection of her Ghost Ops Series. Those three books were AMAZING!! So I guess I judge all her books off of those three. While all of her books that I have read are very good and well worth reading, if you like steamy mysteries, which are my favorite kind. Then hers are a great choice.

This audiobook is a story about a sexy Italian judge who is trying to bring down the mafia in Sicily. The heroine is a decorator who is researching the area for a big job back in Boston and has been asked to deliver a gift to an old friend by her grandfather while she's there. Expecting an old crony, she's stunned to find that the judge is a magnetically sexy middle aged guy. The danger in starting a relationship is very great for both of them because of his work, but they can't resist each other. This is romantic suspense at its finest! Narration was perfect!

This was better than the first. Having lived in Italy I have enjoyed the story locations. Good mystery/romance.

Could not get into this

I fell asleep in like chapter 2! Seriously... pretty boring... What make this so ironic is that you can totally tell the author was going for this Alpha male theme...but the words just didn't flow right... so I got bored and feel asleep.

Maybe a sale... but not a credit or buy

Surprisingly the narration was fairly decent...

the plot was good but sometimes it was hard to follow. At times you couldn't tell how they arrived at that scene and some scenarios are not believable

I wish there was an epilogue. it would have nice to no how it truly ended