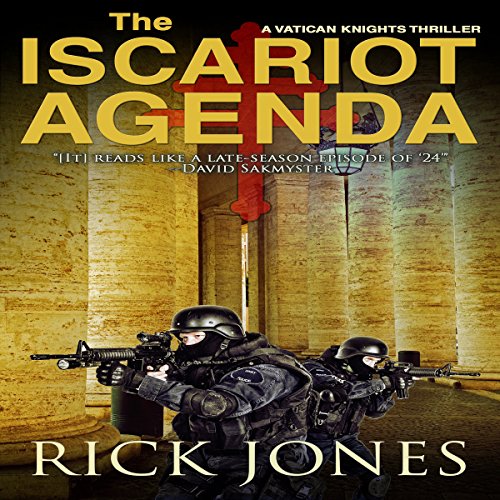 By: Rick Jones
Narrated by: Todd Menesses
Try for £0.00

Kimball Hayden is the commander of an elite commando group known as the Vatican Knights, a black-op force that works for the Church to protect its sovereignty, its interests, and the welfare of its citizenry. But Kimball is being stalked by someone from the past, a soldier who is stronger, faster, and far more brutal - an assassin so deadly not even the Vatican Knights can stop him. This alpha assassin has set Kimball within the crosshairs and is systematically destroying his old team of elite fighters, the Force Elite. Kimball is then sent to confront this killer who leaves behind lettered clues carved into the flesh of his teammates: Iscariot. Not only does Kimball have to battle something far more dangerous than anything he has ever encountered, but he must destroy this assassin before this killer brings his personal war to the Vatican.

What listeners say about The Iscariot Agenda

Good but a bit drawn out and a bit repetitive, Kimball Hayden a Vatican Knight but before that he was one of the elite soldiers bit like the SAS, that would assassinate on demand and walked away because he got a conscious and was doing similar work for the Vatican, and he found out that someone has started to take out his old unit and he was sent out to find out what was going on, and so after every kill the initials was put on the victims body to spell the word Iscariot, Hayden being the last for the showdown, so yes it did get repetitive, but the last 3rd of the novel did come to life, normally this author does well but it might just be the storyline if you are going to kill 8 people it might just repeat it'self as you know what's going to happen I won't get put off just yet and will try another from this author,

Book 3 kept me engaged and wanting for more. Ezekiel was greatly disturbed. Great intro into book 4.

Who can it be now?

Would you consider the audio edition of The Iscariot Agenda to be better than the print version?

Don't know I usually just do audiobooks because I listen to them while I commute to work.

What other book might you compare The Iscariot Agenda to and why?

Some of Tom Clancy's work...not quite as detailed but still enough there to keep you engaged. You don't have to be a weapons or military expert to follow along.

Have you listened to any of Todd Menesses’s other performances before? How does this one compare?

Yes I have, great range of voices again...accents sounded fine to me for all the different nationalities without out over doing them. Each character was distinct. I don't really like when some readers don't change voices for different people I get confused as to who is speaking when that happens.

I did sort of figure out the plot and who was the killer early on but I do that with all mystery books I listen to....it's a curse...LOL.

If you like military thrillers or adventures you will like this one, even if you don't like them normally this one is still good because like I said earlier, you don't need to know a lot of tech terms to follow along. The characters have some backstory and you don't need to listen to the first two books before this one to have it make sense.

This book was both predictable and surprising. The entire book I had an idea of what was going on, but a few times I was surprised and near the end when the "big reveal" happens there had been enough hints that it was obvious who the killer was, but it still shocked me in a way. When I'm reading or watching movies, I try my hardest to let myself get into it, even if it's different or trying to pull me out. It helps me enjoy more movies and books this way. I'm not sure how Jones could have written this to make it less obvious, but I feel like there had to be a way.

The narration was done by Todd Menesses, who does a great job. He has a really deep and dark voice that was perfect for Kimball. It was awesome to hear a story about assassins and feel like the narrator understood who each person was and what they were doing. Todd also did some accents pretty well (those things don't bother me as much, I understand that not ever narrator is multi-lingual or multi-accented -- very few can pull it off well) but Menesses did a good enough job that it didn't pull me from the book.

I honestly had to Google Iscariot to figure out what religious symbol/person it was related to, and that in itself should have been a big giveaway to the ending of the book (which I'm sure others have said in their reviews).

But, to be completely honest, the book flowed really well and kept me actively listening longer than I wanted to be up a few nights. Jones knows how to write a well thought out, fast-paced Thriller. I might have to go back and check out the first two Vatican Knights books.

I was given a free copy of this book. This has not affected my review of it in any way.

If you enjoyed this review, please vote for it! If you'd like to see more like it you can check out BriansBookBlog DOT com.