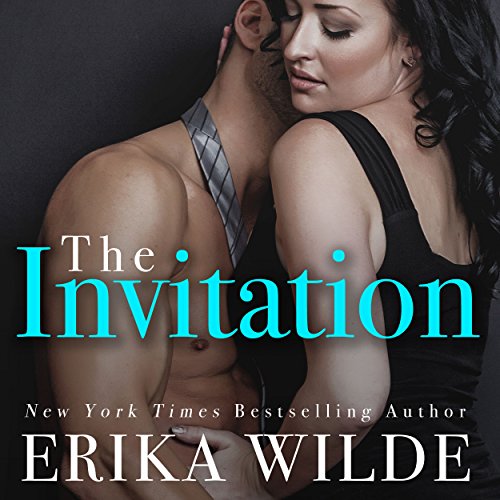 By: Erika Wilde
Narrated by: Lia Langola
Try for £0.00

Jillian is more than willing to accept her husband's invitation, and together they enter a provocative world where boundaries are pushed to the limit, pleasure is the ultimate goal, and Dean is able to embrace those darker desires he's kept a tight rein on all these years. But when Dean's alpha tendencies extend outside of the bedroom, a battle of wills ensues, and it's up to Jillian to show her husband that she's all for submission games in the playroom, but when it comes to her needs outside the bedroom he'll have to learn to compromise.

What listeners say about The Invitation

This Series is the best kinds of sexy to a married woman. It is all about spicing up a marriage and growing closer through intimacy. I have loved every second of it. It is sexy, intimate, and what most want from their marriage. Thumbs up!

Narration is fabulous in these. Lia's character voices are great! I was a huge fan of the narration!

Would you listen to The Invitation again? Why?

Yes because I love the story.

What other book might you compare The Invitation to and why?

I don't have any other books to compare to.

Which character – as performed by Lia Langola – was your favorite?

I love the relationship between Dean and Jillian, very loving.

I volunteered to give and honest review.

Oh my, this was a wild ride. I just love this couple and how their marriage has stayed so alive together through so many years of marriage. It gives you a warm feeling in your heart to read/listen to this book. There’s nothing more amazing than going through life with the one we love. They’re also pretty hot and aren’t afraid of new experiences. I can’t wait to experience the next book, I think Players? With the lingerie and toy store owner. I’m hoping it’s Dean’s friend she meets.

The narrator was amazing! I kept wondering if there was more than one. She’s so great at doing different voices.

Dean and Jillian continue to grow in their marriage. As they try more new things and scenes to enhance their lives, they become closer and happier. I love how they both have to make compromises that is a true struggle to them, how they grow as a couple because of that compromise and trust, and most of all how they enjoy each new experience. It just proves that compromise is not always giving something up but gaining something new.

Lia Langola has the perfect voice for this narration. She has such a way with connecting with all the characters that they all come to life. MS Langola creates that escape into the book that most readers seek as they read a book. It is a movie in the mind. Ms Langola has a voice that is easy to listen to, a pace that is just perfect to follow and she can separate all the characters that makes the story easy to follow.

great continuation to this series! loved it! hot and sexy! I was voluntarily provided this free review copy audiobook by the author, narrator, or publisher.

Adored this couple before, now I'm head over heels

What?! I need to start off by saying how disappointed I was to discover that about the last forty minutes of the audio book were an excerpt of the series about the club that Jillian and Dean visited in THE INVITATION. This long-married couple completely stole my heart, so I was devastated to see them go so much earlier than expected. Why not giving them another scene in the Players Club instead?

And with that I have mentioned the only thing it didn’t completely agree with in this book. THE INVITATION is different from the previous novellas: Whereas installments one to four were pure sex and passion, this story went deeper into who Jillian and Dean are as a person and as a couple. We learn about their history together and experience their devotion for one another on an even deeper level than before. Their dynamics and the fact that they have been married for so long and are now reinventing their love lives after their kids are grown up…I don’t think I would ever tire of reading their sexcapades. I adored this couple before, but now I absolutely love them!

Dean is one swoon-worthy protective and caring and hot and sexy alpha male. The epitome of one perfect example of the male species. And yet he still has flaws, insecurities that were caused by his upbringing, which has him not only pushing their boundaries sexually but generally as well. He does not deal well with Jillian’s newfound independency and her desire to have a job – a very venturous and bold at that. After twenty years of marriage changes as significant as that are not as easily accepted. But Jillian, being as stubborn as he himself, leaves him with little option than to eventually come to terms with this change.

The feelings this book put me through are of wide variety, not to mention the blisters on my fingers after burning my hands on my Kindle during those hot-as-hell scenes those two got down and dirty. At this point I have to mention the sublime writing: After Dean going ballistic in one of the previous novellas when another man advanced on Jillian – which actually previously was his own fantasy, no less – the route this book would take was set, no matter if those two pounced on one another in their bedroom or in a sex club. And yet the perfect illusion was created where I held my breath, not sure what to think.

While this book set the course for a new series which revolves around The Players Club – a series I am very curious about – I am just not ready yet to see Jill and Dean go. I need more! Knowing that there is at least one more installment out there for me to devour fills my heart with joy – but even them I don’t believe I will have had my fill. I want to meet their children as well. Do they sense the changes in their parents’ relationship? Can Dean and Jillian be discreet enough to not scare their children who are young adults now for life? :)

Same as with the previous installments, I listened to the audio book version, which was narrated by Lia Langola again. This series is the first of her works I have listened to and I am already on the lookout for more of her. Her voice, her intonation, her impersonation of both Jillian as well as Dean, the myriad of feelings she is able to convey. I cannot wait for installment 6 to be available as audio book!

Such a great listen

Could not wait for this book to come out! Now I'm done listening and want more.

With the narrator's good job of voicing these characters, she creates individual voices that separates all characters in my head. This is done really well and I would listen to more of her work. A job well done.

I voluntarily reviewed a review copy of this book.

Where does The Invitation rank among all the audiobooks you’ve listened to so far?

Thsi is a great continuation to the series. I love this series.

What was one of the most memorable moments of The Invitation?

When dean and Jillian go to the players club and for the first time.

Have you listened to any of Lia Langola’s other performances before? How does this one compare?

The first part of the marriage diaries. I love this series. And lia Angola’s narration