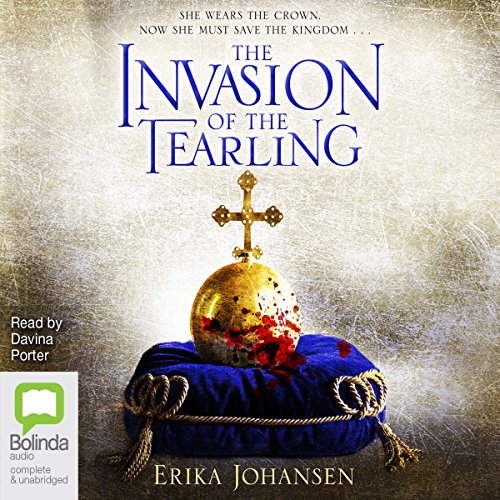 The Invasion of the Tearling

By: Erika Johansen
Narrated by: Davina Porter
Try for £0.00

With each passing day, Kelsea Glynn is growing into her new responsibilities as Queen of the Tearling. By stopping the shipments of slaves to the neighbouring kingdom of Mortmesne, she crossed the Red Queen, a brutal ruler whose power derives from dark magic, who is sending her fearsome army into the Tearling to take what is hers. And nothing can stop the invasion.

But as the Mort army draws ever closer, Kelsea develops a mysterious connection to a time before the Crossing, and she finds herself relying on a strange and possibly dangerous ally: a woman named Lily, fighting for her life in a world where being female can feel like a crime. The fate of the Tearling - and that of Kelsea’s own soul - may rest with Lily and her story, but Kelsea may not have enough time to find out.

In this dazzling sequel to her best-selling debut The Queen of the Tearling, Erika Johansen brings back favourite characters, including the Mace and the Red Queen, and introduces unforgettable new players, adding exciting layers to her multidimensional tale of magic, mystery and a fierce young heroine.

"Like Game of Thrones and The Hunger Games meets Pulp Fiction." ( The Daily Mail)

What listeners say about The Invasion of the Tearling

Very disappointing book. Very much liked the first and this one missed expectations.
There was little character development, and the story seemed to drag on. This was not helped by the very dull and lengthy descriptions of life before the crossing.
Not a good read

I don't understand why they have swopped the person who reads this from the first book. The third book also appears to be read by someone else completely! It took me awhile to get into and to stop being distracted by the new voice and the way she made the main character speak, as I listened to this straight after finishing the first book. Grrr. Now onto the third.. With another person reading. Yey.

Apart from that, book is good. Less confusing now when it switches between time frames/places than it was in the first book. One can't help feeling that perhaps these three books could have been just a single book however.

Better read than listened to.

I think this might be a book that is better read than listened to. I devoured the first book of the series after borrowing it from the library. Library didn't have the second one so I decided to listen to it on audible. It wasn't bad, but it just didn't excite me as much as I think reading it would have done.

Davina Porter is definitely my favourite reader! The story was great too, I'm looking forward to listening to the last book!

Would you listen to The Invasion of the Tearling again? Why?

Loved the story and the characters. But WHY would you change the narrator in the middle of the series - so irritating!!!

I am so sooo pleased that I persevered through Book 1. The narrator of the first book was awful to listen to but I kept with it as I knew a different person was reading this , the second book. Really enjoyed this narration just hope Book 3 is read as well as I can't wait to hear what happens next.

A tad confusing for me. Narrated well <br />

I am not sure if I will bother with book 3. who is her father?

I enjoyed the second book less than the first book, the two timelines were a bit jarring for me, although they came together towards the end and started to make sense. I'm looking forward to the final book to see where the story goes as I have enjoyed it and I do like most of the characters, especially Mace. I'm interested to see how the time travelling element works and whether we're actually in the future or the past.

good follow on to the queen of the tearling. sometimes a little hard to follow but a brilliant listen all the same

I really enjoyed the first book in the series but this sequel didn't seem to know where it was going. We spent too much time in the rather uninteresting flashbacks to the past and there was no real cgaracter development for the characters that had been so lovingly introduced in the first book. At times I felt that I had wandered into a totally different series. This feeling wasn't helped by the change in narrator. The new reader made the voices seem to old and it took me a long time to get involved. There was still promise here and I really hope she can bring all the disparate strands back together in the finsl book.