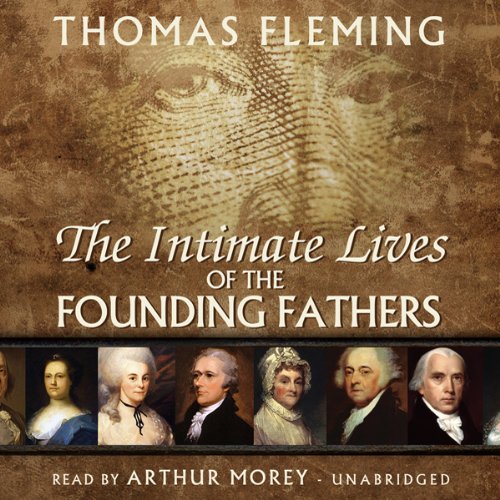 The Intimate Lives of the Founding Fathers

By: Thomas Fleming
Narrated by: Arthur Morey
Try for £0.00

From hot-tempered Mary Ball Washington to promiscuous Rachel Lavien Hamilton, the founding fathers’ mothers powerfully shaped their sons’ visions of domestic life. But lovers and wives played more critical roles as friends and often partners in fame. We learn of the youthful Washington’s tortured love for the coquettish Sarah Fairfax, wife of his close friend; of Franklin's two “wives,” one in London and one in Philadelphia; of Adams’s long absences, which required a lonely, deeply unhappy Abigail to keep home and family together for years on end; of Hamilton’s adulterous betrayal of his wife and their reconciliation; and how the brilliant Madison was jilted by a flirtatious fifteen-year-old and went on to marry the effervescent Dolley, who helped make this shy man into a popular president. Jefferson’s controversial relationship to Sally Hemings is also examined, with a different vision of where his heart lay.

Fleming nimbly takes us through a great deal of early American history, as the founding fathers strove to reconcile their private and public lives, often beset by a media every bit as gossip-seeking and inflammatory as ours today. He offers a powerful look at the challenges women faced in the late eighteenth and early 19th centuries. While often brilliant and articulate, the wives of the founding fathers all struggled with the distractions and dangers of frequent childbearing and searing anxiety about infant mortality. All the more remarkable, then, that these women loomed so large in the lives of their husbands—and, in some cases, their country.

“[A] well-researched peek into the boudoirs of America’s political architects.” (Washington Post )
“Thomas Fleming is one of our most interesting scholars of the Revolutionary period, and in his insightful latest work he does not disappoint. Focusing on the wives and women of the founding fathers, Intimate Lives is thoroughly fresh, frequently fun, at times touching, and always fascinating. A significant achievement.” (Jay Winik, author of The Great Upheaval and April 1865)
“Tom Fleming is a rare combination—a fine historian and a fine writer. His assessment of George Washington’s relationships with Sally Fairfax and Martha Custis is right on target.” (Peter R. Henriques, author of Realistic Visionary: A Portrait of George Washington)

What listeners say about The Intimate Lives of the Founding Fathers

some interesting dirt on our national heroes

One of the best books written about the founding fathers; people we thought were gods. Surprisingly, these "gods" had very human failings. George Washington, it seems, hated being president and refused to run again, until he was absolutely pressured into it. Jefferson failed miserably at being the Governor of Virginia. Alexander Hamilton, who set up this country's banking system, and was the first Sec. of the Treasury, had to admit to an affair to keep from being indicted for stealing out of the public coffers (found to be not true when he died.)The book is interesting, well written, and the narration is superb.

I did learn some new things in this book, and some of the chapters were quite enjoyable. However, throughout the whole thing, the author seemed to display judgmental prejudice against some founding fathers while giving a much more generous and fair treatment to others on similar topics (morality, slavery, debt).

I learned a few things and enjoyed hearing more about the founding father's personal lives and how they shaped their public personas. This book has some good content, but is detracted by its lack of impartial discussions on historical figures - particularly Jefferson, whom Fleming seems to think was lucky, but overrated and under-talented - a fact he drives home whenever he can. I most sincerely disagree.

I really enjoyed Fleming's book. He is thoughtful and articulate. He not presents his ideas but also the opinions of those whose ideas run counter to his and methodically and logically debunks their claims. Recommended reading!

Being somewhat of a histryofile, (okay, I know that not a word, but you know what I mean), I enjoyed the book as I do enjoy most of Fleming’s work. And the narrator was competent enough, the only thing was his voice had 2 distinct timbres, or at least I thought so. Once I got comfortable with his words he’d go off with the other voice. I became distracted listening and also waiting for the timbre to switch back, because I knew it was going to, the only question was when. I’m not sure how this came about, my first thought was maybe they decided to expand the abridged version so he added words at a later time, but I don’t guess that makes a lot of sense. So maybe the producers decided to revoice (another made up word, I guess) certain sections for clarification and he had a cold or something else effecting his voice, that day. I feel the timbre factor was 70/30. But again I enjoyed the story, I just wish I had heard it in one voice.

This is a well-researched and nicely presented summary of five of the US’s Founding Fathers and the influence, love and contributions of the women in their lives. Recommended for anyone hoping to learn general histories of our earliest politicians, the events of the forming of the nation and the roles of the women who surrounded the male history makers.

Wish I could've been there!

Thomas Fleming, possibly one of the best historical writers of the 1980s and 90s. He does, as always, places the information in such a format to bring the reader into the story and live the events depicted by the subject. I found it useful while listening to the book to use a paper and pencil to sketch out timelines for each founding father in the people that surrounded his life. This enabled me to keep track and refer back to names places and dates as the book marched through the founding fathers. This book is certainly a must read volume and will bring facts to life which you never learned in school.

Information I didn't need to know

From time to time I like to flavor my reading of fiction with a book on history, a biography, or some other non-fiction literature. This is usually easy and rewarding as there are so many excellent books available lately that inform and are also entertaining. For this reason I decided to try the Intimate Lives of the Founding Fathers.
I must admit that the mistake was mine. I did not pay careful attention to the title, which had I done so, already gave the clue. What possible interest would I have in the intimate lives of people who have been dead for over 200 years? However, the publisher's review promised that we would learn how wives influenced from behind the scenes. From reading the review I felt that I would be receiving an inside look at how political positions were formed and how strong women guided and supported their husbands.
I barely had the patience to listen through all of George Washington and part of Benjamin Franklin before deciding that for the first time in my two years as an avid Audible listener, I am not going to finish a book.