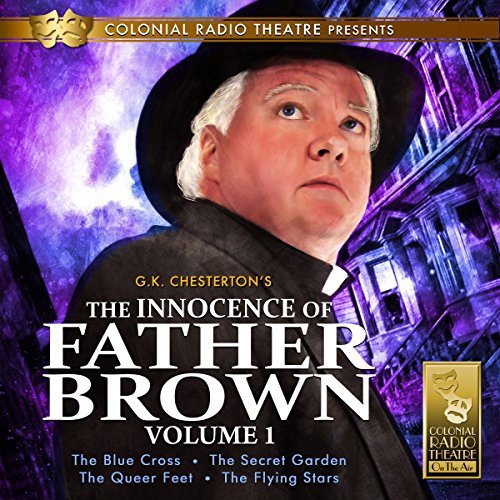 The Innocence of Father Brown Vol. 1

From London to Cornwall, then to Italy and France, a short, shabby priest takes on bandits, traitors, and killers. Why is he so successful? The reason is that after years spent in the priesthood, Father Brown knows human nature and is not afraid of its dark side. Thus he understands criminal motivation and how to deal with it. The award-winning Colonial Theatre on the Air has dramatized G.K. Chesterton's Father Brown stories from The Innocence of Father Brown with a full cast, music score, and sound effects.

Father Brown is traveling to London to attend a meeting of priests, and he is carrying with him a priceless silver cross, studded with blue sapphires. Flambeau, the thief, plans to steal it.

Father Brown is called to investigate the beheading of a man, committed in a closed garden. How did the murderer escape?

Father Brown investigates a death at the Vernon Hotel.

Father Brown has been invited to a Christmas masquerade, which becomes the target of a robbery.

Based on The Innocence Of Father Brown by G.K. Chesterton

What listeners say about The Innocence of Father Brown Vol. 1

Not the most exciting sleuth stories ever.

The cast reading is really enjoyable. However, the stories come through a little flat and bland.

The All Nice Cheeky Father Brown

A nice way to spend an hour or so with the cheeky Father Brown.
Quite straight work, but a welcome treat without full on the face depressive violence in most genres of today.

As good as the BBC version

This is a fantastic production. Old time radio style. Loved it. Fun and cute. I enjoyed it more than the actual novel by Chesterton.

The actor playing Father Brown is good, the rest of the cast variable. The sound effects are exaggerated and irritating. The choice of music is inappropriate. But the stories are good. My advice is to try the BBC dramatisations instead.

I thoroughly enjoyed this radio show. Great fun! It gave a great atmosphere that was very in keeping with the original stories!

The mechanics of mystery were very well done. Somewhat reminiscent of Sherlock Holmes. Offers a classic "explanation" of the solution just before completion.

If you are looking for a new neat set of stories that are clean and safe for older children (decapitations in storyline), these are worth your time and money.

If I had anything negative to say it would be the overreach of a couple of character's accents (not that I could do near as well). At times it was difficult to make out what was being said. Also, sound effect overwhelmed speech from time to time. These had little impact on a great storyline!

A milder form of the Sherlock Holmes type of crimes, though from the equally keen Father Brown. A fun listen with a chocolate loving Father.

What would have made The Innocence of Father Brown Vol. 1 better?

Less insults to reason and skepticism in the first story.Too many "science is less worthy than religion" tropes.

Would you ever listen to anything by M. J. Elliott and G. K. Chesterton again?

If you could play editor, what scene or scenes would you have cut from The Innocence of Father Brown Vol. 1?