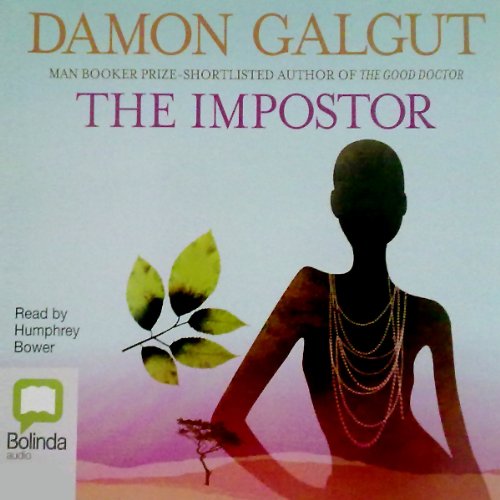 5-star reviews on amazon.co.uk from the Booker Prize-shortlisted author of The Good Doctor comes a gripping novel of guilty secrets, obsession and self-reinvention, set on the African savannah. When Adam moves into the abandoned house on the dusty edge of town, he is hoping to recover from the loss of his job and his home in the city. But when he meets Canning - a shadowy figure from his childhood - and Canning's enigmatic and beautiful wife, a sinister new chapter in his life begins...Canning has inherited a vast fortune and a giant folly in the veld, a magical place of fantasy and dreams that seduces Adam and transforms him absolutely, violently - and perhaps forever.
©2008 Damon Galgut. (P)2009 Bolinda Publishing Pty Ltd

"Fast-paced and breathless... Galgut has a knack for the image that cuts to the quick of a character... his plots seem propelled by a logic of their own." ( Observer)

I found The Imposter gripping from the first second to the last. Well structured and a purpose for every minute detail. Damon Galgut paints a sinister, dark post-apartheid South Africa where all the main characters are victims in some way; the effects of the old system can still have a devastating effect, most especially on those who the change was meant to help. Although I believe Humphrey Bower is Australian, his South African accent is faultless. He is a first class narrator.

Brilliantly done on all three accounts

What made the experience of listening to The Impostor the most enjoyable?

Humphrey Bower read the storey in such a way that at times I felt as though i was watching it on the television. It felt real

Which character – as performed by Humphrey Bower – was your favourite?

Probably all but mostly Nappy (aka Adam), Blorm (the old man, next door) and at times Kevin (Canning)

I am an absolute fan of Humphrey Bower. I think he may have single-handedly changed my views on the South African accent. I have also become a Fan of the writer, Damon.I have added him to my favourite authors The storey flows with ease short but enough to tell the story. I will be buying another of his books.

I wonder if I just missed the point with this book - where was it going? Was it too subtle for my little mind perhaps? Or just actually not going anywhere...?
Well narrated though...

The story is compelling, getting deeper and darker at every turn. Humphrey Bower is masterful.

A WASTE OF MONEY

The book could have been an enjoyable listen (although some plot elements are downright beyond belief) but the narration reduces it to farcical levels. The narrator adopts a psuedo South African accent and strange voice intonations for all the characters, which makes them not only comical (at best) but wholly unbelievable and simple minded (at worse). It is off-putting and unnecessary - South Africans do not speak like that. I perservered only because I thought the author could not be blamed for the clownish performance, but my advice is: DON'T BUY THIS BOOK.