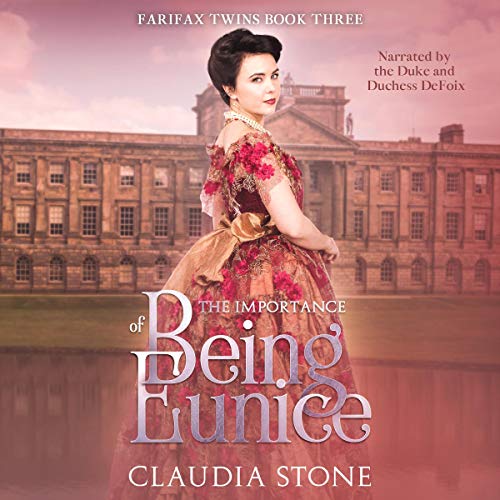 The Importance of Being Eunice

By: Claudia Stone
Narrated by: Duke DeFoix,Duchess DeFoix
Try for £0.00

A duke, a spinster, a faux engagement; what could possibly go wrong?

For four seasons Lady Eunice was quite content with the mantle of wallflower. Bespectacled, frumpy, and put-upon by her overbearing mother, all she really wished to do was vanish from London once she came of age to inherit her fortune.

The sudden reappearance of her childhood sweetheart, the dashing Theodore Belhurst, soon changes her mind, and Lady Eunice decides that she does wish to wed after all.

But how does a girl so unremarkable, she's often referred to as "Lady Who" attract the attention of society's favoured son? Why, she enlists the help of a duke, of course! A faux engagement to the arrogant, abrasive, and sinfully handsome Duke of Belmont is certain to make Theodore notice her.

Never mind that she had to bribe the man into agreeing to her proposal, nor the fact that she cannot stand his haughty ways, as long as he helps her win Theodore's heart, Eunice decides she can stomach pretending to be his betrothed for as long as is needed. But when she begins to see beneath the duke's hard exterior, to the wounded man beneath, Eunice begins to wonder if she's actually chasing the wrong man...

Aubyn Euripides Charles Cantwell, Sixth Duke of Belmont, was not looking to enter into a faux engagement, but when a meddling spinster suggests such a thing and threatens his operation as a spy for the Crown, he finds himself in just such a situation.

Despite his initial reluctance for the hare-brained scheme, Aubyn soon finds himself enchanted by the kind and brave Lady Eunice. A turbulent childhood had left him scarred, and uncertain that he could ever marry, but as Eunice delights in revealing his soft side, Aubyn wonders if perhaps she might be the woman to set him free from his dark past.

As the weeks pass and Eunice grows ever closer to snaring the charming but irresponsible Theodore, Aubyn realises that he must act quickly to ensure he does not lose his faux fiancée.

This sweet, laugh-out-loud, regency romance is the third book in The Fairfax Twins Series but can be listened as a standalone novel. If you adore romances with humour, wit, and a super sweet ending, you're sure to love this great listen!

What listeners say about The Importance of Being Eunice

I was given this free review copy audiobook at my request, and have voluntarily left this review. This tale is a lot fun. A chance meeting brings Lady Eunice and Duke of Belmont together and deal is made between them. Lady Eunice will not mention the Duke's snooping and the Duke will help Eunice gets the man she wants to marry. Misunderstanding and awkward moments create some touching, but usually humours moments. With well written characters and great narration, you'll keep listening to this very enjoyable tale until the very end.

Such a cute and heart warming story.
This is a really sweet story so get your sweet tooth ready. It just gives you all the warm good feelings. 5 heartwarming stars!!

The Importance of being Eunice

This was a lovely romance. The H/h were very lkeable, the story was fun and the hea well deserved. Eunice is a smart carrying young lady who donated her time to charity and is nice to others even those who may not deserve it. Aubyn is the strong standup guy every woman wants in her life.

I have not read or listened to the first 2 books in this series nor did I feel I needed to. However, I enjoyed the book so much I want to go back and read/listen to them now.

Wow now that is how a dual narration should be done! They both did a wonderful job and kept the story alive! I will be listening to more by these two.

This was a nice regency romance and one of the best duet narrations I have heard. The book itself had a few too many (IMHO) modern takes on issues such as women's rights/independence, child abuse, etc - yes, I know those things all existed but the take on them by all the main characters was more modern than period.

Romance was nicely developed and characters were engaging.

This was such a great story

I loved this book. It is emotionally satisfying and excellently written. I was a bit frustrated with the h but she was likeable and intelligent. I fell in love with the Duke he was very attentive and sexy. The author kept an impressive pace and the H and h love story didn't feel to rushed. The narrators did an excellent job setting the tone. They really brought the characters to life. This book did not disappoint

*I was given this free review copy audiobook at my request, and have voluntarily left this review.