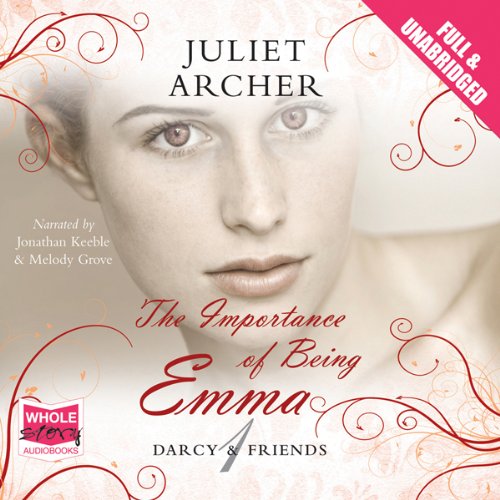 The Importance of Being Emma

Mark Knightley is used to women falling at his feet, except Emma Woodhouse- she's like part of the family. But Emma's grown into an attractive young woman, full of ideas for modernising her family business, and when Mark gets involved the sparks begin to fly. Although he's seeing her through totally new eyes, Emma remains immune to his charm. She's never forgotten the embarrassing moment when he discovered her teenage crush on him. He's still pouring scorn on all her projects, especially her campaign to find Mr Right for her ditzy PA. Anyway she only has eyes for the mysterious Flynn Churchill...

What listeners say about The Importance of Being Emma

What made the experience of listening to The Importance of Being Emma the most enjoyable?

I thought that the author did such a good job of updating a Jane Austin beloved classic. Some of the re-worked versions of her novels have been successful, others not so. In this book, it has been a success. It was a quirky, modern take on the original story, imaginatively brought up-to-date to current times. Not wanting to spoil anyone's enjoyment, I particularly liked what the author had chosen to do at the Christmas party - something that might happen in our modern times. I thought it was a good idea to write the book from both the view point of Emma and that of Mark Knightley, so it kept the reader/listener abreast of what each character was thinking. It worked really well, particularly on audio as Jonathan Keeble & Melody Grove's performances were excellent and added even more to the book.

Mark Knightley as the hero of the book. He was wonderful in Jane Austen's version & the author has done justice to him here. He came across as gentlemanly (as always), thoughtful, passionate and, well.....just gorgeous. Emma's 'make-over' to modern day was fun too - feisty, emotional and as ever, mis-guided. I thought the updated version worked very well (I think Ms Austin might have blushed at the pre-marital shenanigans) All in all, a very enjoyable & highly recommended book to those of us who love Jane Austin's stories.

Which character – as performed by Melody Grove and Jonathan Keeble – was your favourite?

Mark Knightley - I thought Jonathan Keeble was superb, really excellent. His portrayal of Mark Knightley came across as a very sexy man indeed,which at times gave me goose bumps the way some of his speech was read. His voice was like velvet - I could listen to him all day. The funniest thing that made me laugh-out-loud was when he spoke the words of Harriet 'Chav' Smith - SO funny. Melody Grove was very good as Emma too.

If I could have had the time, yes I would have, as it was so enjoyable

Its not often that I listen to a book again immediately after finishing it, but I enjoyed it so much, I listened to it once more, which is most unusual for me. The second time was even better as there were conversations that I had missed first time round. Highly recommended.

Emma for the 21st century

THE IMPORTANCE OF BEING EMMA - AUDIO VERSION

This is a modern re-telling of Jane Austen's classic, which sticks pretty closely to the plot of the original for the most part. I have to warn those who don't like such things, that it does contain a certain amount of profanity, references to sex and a couple of sex scenes as well, so this would be a read/listen for mature audiences only.

The story is told from alternating POVs; being that of Emma herself and the modern Mr. Knightley, here called Mark rather than George. The George Knightley in this tale is Mr. Knightley Senior, who's still alive but absent for the most part on a cruise with his second wife. It was interesting seeing the story from Mark's side as well as Emma's.

The story is set in the world of the food/catering business. Emma is the newly appointed Marketing Director of Hartfield Foods and Mark is temporary CEO of Donwell Organics is his father's absence. Mark has spent the past eight years working for his family firm in India. He hasn't seen Emma grow up from the teenager (nicknamed 'Mouse') who had a crush on him, into the beautiful young woman she is now. He also has a girlfriend back in India, one of the few departures from canon.

All of the usual characters are present. Harriet Smith is a ditzy, chavish PA who's replaced Kate, now Mrs Weston. Mr Woodhouse is the same hypochondriac we all know and Miss Bates is also very true to canon, working for Hartfield Foods past retirement, I think, due to financial reasons. Philip Elton is Hartfield's Finance Director and we meet a truly awful modern Augusta Hawkins (known as 'Gusty'). Robert Martin runs a local haulage company. Jane Fairfax turns up on a work placement in Emma's marketing department and Frank Churchill, renamed Flynn, is an Australian celebrity chef who's very full of himself. Emma's sister is still married to Mark's brother, as in canon.

One thing I think that the audio version gains over the printed version is that two narrators were used. Melody Grove voices Emma's sections and Jonathan Keeble does Mark's. I really liked both their voices and would definitely listen to more audiobooks narrated by either or both.

I find it hard to see why some people have given this book such poor reviews and low ratings. I thought it was a pretty good attempt at bringing this story into the modern world, including all the baggage that goes with melding the original storyline with 21st century morals and expectations.